Not to be outdone, the folks at Neversoft have released a trailer for Tony Hawk’s Proving Ground. EA’s corporate line on TH is that they’re really not the competition because our games are fundamentally different. This is actually sorta true. That said, the public loves to compare the two games in every gaming forum out there.

I get to sleep in tomorrow. I’ve been working a lot lately and it’s been over two weeks since I’ve had a day off. I told my manager today I wasn’t coming in until 1pm tomorrow. He was totally cool with it. I can finally watch Regis and Kelly Lee right to the end for once!

Daddy’s too tired to post anything substantial tonight. Instead, let’s watch one of the latest trailers from skate. I’m so busy, I haven’t even been able to skate that massive ramp.

While leaving the Starbucks at the Pan Pacific at around 6pm today, I saw B.C. Premier Gordon Campbell. He was leaving the hotel and quickly got into a van. My companion, a fellow co-worker who shall go unnamed, called him “Brian”.

There are probably over a dozen of my co-workers still at the studio tonight. I can say that we’re trying to meet a very important deadline. The surprising thing is that I got to go home at the early time of 10pm.

So while I arrived at home slightly before 10:30pm, people were continuing to make shiny things appear on screen. I could have just relaxed, folded my laundry, and fed my pet condor but I couldn’t resist logging into to my work e-mail. I checked it before 11pm and I just checked it again. There a fair number of messages to be read for that time of night.

I just need to know how things are going. As if that wasn’t bad enough, I also checked the Perforce server for the submitted changelists. All work on our game is submitted via a server that can track changes for us. You can view these changes in a timeline so you can see who checked in what at what time. People usually don’t read these things but I do since I can’t help but be nosy about what to expect when I get back to the studio in the morning.

Last week I was at work in the evening, one of many evenings that I’ve been at work. Having not had some time off recently, I almost fell back into some old habits. When I’m doing lots of OT, I tend buy things on a whim, usually off the Internet. Money tends to accumulate in bank accounts when you’re working lots. This behaviour started when I was a games tester. Back then, I didn’t make a lot of money, so the spree buys were limited to small things.

I make a tiny bit more money now as a software engineer, which probably explains why I was about a mouse click away from buying a 37″ Sharp Aquos LCD HDTV sight unseen. I thought that buying that TV certainly would make the evening much more enjoyable. Then reality decided to show up. Even if I did buy that TV, I wouldn’t really have time to use it. I had no idea how the display looked. I hadn’t read any reviews on this model. I didn’t even know what inputs it had.

Cooler and more budget-conscious heads prevailed, so I backed off on the purchase. Instead, my George Foreman Grill is being airmailed to me as you read this. 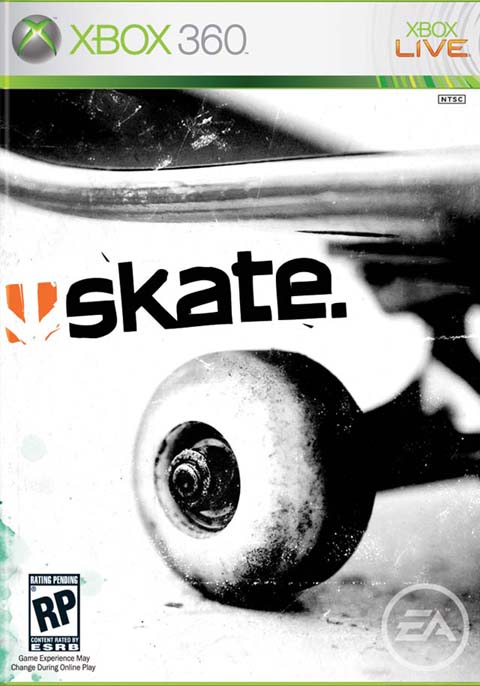 The marketing and product management people at EA quietly released the cover art for our game to various web sites a few weeks back. They decided on this cover many months ago and I was quite happy with it when I first saw it.

The prevailing opinion is that it doesn’t look like a typical cover for an EA game. People should take that as a compliment because EA is definitely trying something new with skate. Look for this cover art on store shelves… soon?

Everyone at the Vancouver studio got an e-mail about a month ago stating that we had to do take “sexual harassment” course. At the time, people didn’t know everyone else had gotten the e-mail, so lots of people were wondering who’s ass they shouldn’t have slapped.

It turns out the course is to be taken online. It’s done via a browser and you can choose to do it with video and audio or just text alone. With multimedia, it takes about two hours to do. Without it, it’s about 90 minutes. When you finish the course, you get sent a certificate.

Some people did the course right away, while others have not (like myself). I got sent a warning last week about it being my final notice for taking the course. It didn’t list any consequences if I didn’t take it. I probably should take it soon. The problem is, we’re so busy, two hours of work time is a lot to ask for.

Also, a popular refrain these days around the floor is, “Oh, I’m allowed to say things like that since I haven’t taken the course.” It makes a great way to end an inappropriate joke.

I didn’t have to take a cab home tonight. One of the development directors drove me home. He lives in Port Coquitlam. Joining us was another SE, he lives in Coquitlam. The DD lived in the UK less than six months ago. Now he’s driving on the opposite side of the road. His driving is pretty good. I bet I would have done worse if I had to drive in the UK.

After a much anticipated opening, I was able to patronize the Taco Bell / KFC combo restaurant near Coquitlam Centre tonight. In short, it was a slightly disappointing visit that left me with a hint of great promise for future visits.

When I arrived, I instantly noticed there were lots of people waiting for their food. At least five people were waiting for their orders. Despite this, I walked up to the counter where an impressive menu greeted me. Yes, you can get Taco Bell and KFC at this place but did you know you can combine the two? That’s right! So let’s say you get a two piece KFC meal but you’re hankering for a taco. Adding a taco is just a dollar extra. Say you decide you want a quesadilla meal from Taco Bell but you gotsa yearning for a piece of fried chicken. One loonie more will get you a nice piece of Original Recipe.

I selected the Crunchwrap Supreme with beef. Rather than describe it, just look at this guy’s blog post about it. Ordering is fine but I must have waited ten minutes for my food. It sucks to wait around that long for “fast” food. Also, the pop / soft drink / soda dispenser was out of 7-Up syrup. I had to toss out my cup of club soda and fill up with something else that I didn’t want.

Despite the super long wait for my food, once I got home with my Crunchwrap, I was pleased. It wasn’t greasy at all and it tasted really good. The lettuce in the thing was really fresh and everything stayed neatly in the pocket.

I’m going to return to try out the fried chicken and then order a taco as a side.

Seriously, if I don’t stop ordering stupid stuff to eat my heart is gonna complain lots in about ten years… probably less.