I’ve been averaging nine to ten hours of sleep since Friday night when my holiday break started. I didn’t explicitly plan on using my break to sleep that much but with nowhere to be during the day, it just seemed natural to just stay in my warm bed during these cold times.

I gotta say, I didn’t realize how tired and exhausted I was before the break. I feel fantastic after several days of rest and complete nights of sleep. I feel much more alert and energetic. I think this really underscores how much sleep I was missing prior to this.

I will really try to get more sleep once I return to work.

Tomorrow is probably my favourite work day of the entire year. A great number of my co-workers will already be on holidays and the rest of us left on the last day are mostly in holiday mode anyways. People will show up late and leave early. Some will even start drinking at work. It’s going to be awesome.

On a monthly and yearly basis, I eat more meals prepared by the EA Vancouver cafeteria than anywhere else. Per week, I eat five lunches, two or three breakfasts, and the occasional dinner from that one place. You can understand how I have a vested interest in the quality of the meals that come from there.

Last year, studio management decided to remodel the cafeteria, which includes the seating areas, the kitchen, and the serving stations. It took six months and it was costly. Management was really hoping this remodel would greatly enhance the dining experience for employees. A few months after the remodel was done, a survey went out to some employees to gauge the current level of satisfaction regarding the cafeteria. I can only speak personally but the remodel didn’t seem to affect the quality of the meals one way or another. In some cases, we had culinary choices taken away from us. Before the renovations, I thought the meal quality was average and my opinion didn’t change much after all those millions were spent. If I had to guess, other survey responses were either similar or even said the food quality and selection got worse.

It’s my theory that studio management weren’t too pleased about survey responses. Given how much money they spent, employees still didn’t seem happy enough with the cafeteria. Well, unbeknownst to most employees, management took action. It was revealed very recently that a new food services contract was awarded to a different company. When employees return to work in the new year, we’ll see the cafeteria run by new staff and a whole new menu will be available. Some of the changes will be immediate, while others will be phased in over the next few months. Some of the highlights include the return of the food trucks every Wednesday during the summer months. There will be a station dedicated to bacon related food items. We’ll be getting a dedicated pastry chef. Last but not least, Revolver Coffee will be taking over our two coffee bars and serving their unique selections of coffees.

I’m excited to see what’s in store for the new year. I love food, so I can’t wait for some better lunches and other meals! 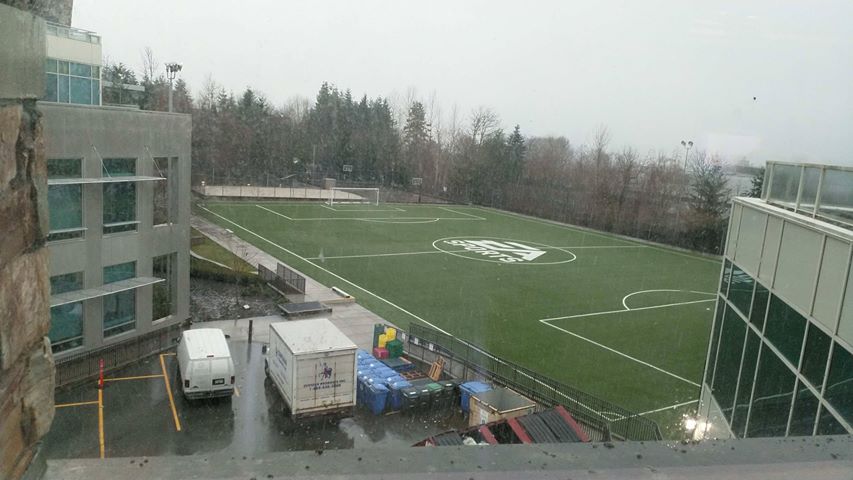 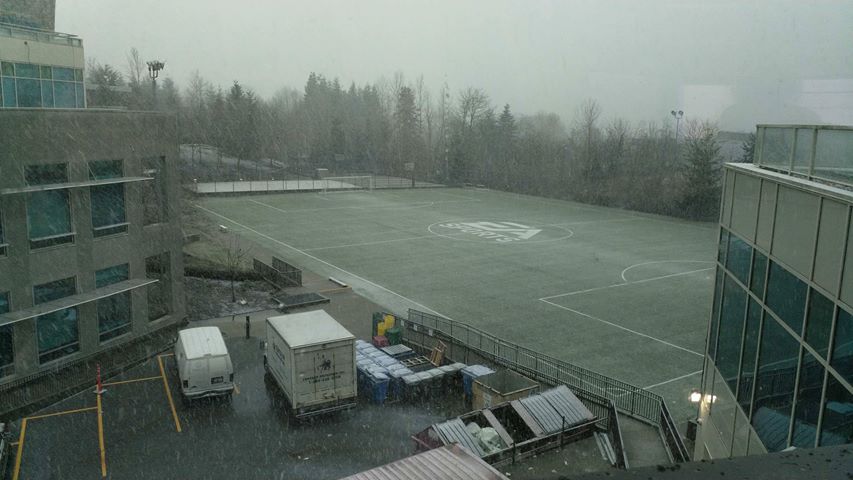 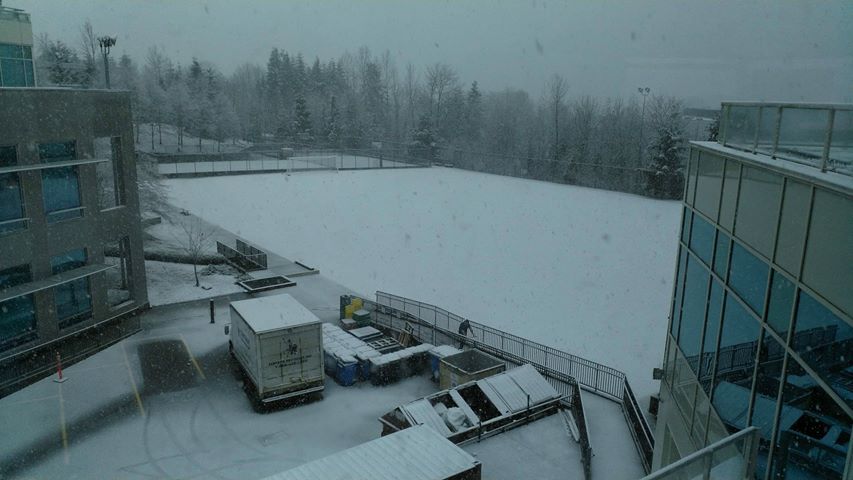 When I went to work this morning, it was very rainy and wet. It was so wet outside that my shoes got drenched and my socks were soaking up water. After a very uncomfortable walk to work, I changed my socks and settled in for a rainy work day. I had a morning meeting and then the weather changed.

The three images you see above were taken less than an hour apart from the first image to the last. Lots of people bailed from work around lunch time, afraid that the roads would be a nightmare come evening. My manager gave the engineers the ok to leave early. I stayed until 2pm and to be honest, my commute wasn’t that bad.

It’s supposed to snow in the greater Vancouver area on Tuesday but it probably won’t stick around to make it a white Christmas. Rain later in the week will most likely wash it away before Monday. I’m ok with that.

So far this year, the snow hasn’t come down like it did last year when record snow falls blanketed the city. I think this time last year we would have already had two major snowfalls and I had taken a few snow days from work. It’s a different story this time around.

This is the last week of work for the year and I’m looking forward to spending a whole week off. Some of my co-workers are probably going to take off before the end of the week but I’m going to try to finish this year strong. I’ve got some important work to be done and I can’t really coast into the new year.

Star Wars spoilers are now in the wild on social media. A few people I know have already seen the movie. If you care about such things, it’s time to avoid social media for a few days until you can get yourself into a movie theatre.

It probably was the salmon that I made for dinner last night but I wound up having a really terrible night of sleep. I barely got any rest and was out of it for most of the day.

I’m exhausted now and I think I’m gonna crawl into bed. Have a good day.

It’s going to be tough staying off social media starting on Thursday night but I risk seeing spoilers for the new Star Wars movie if I don’t. A friend told me to especially stay off YouTube since a lot of YouTube comments spoiled the last movie.

I checked the theatre downstairs on their web site and tickets for shows this weekend and next weekend are almost sold out for nearly every show. Christmas is still almost two weeks away but you’d be hard pressed to find a decent seat for the 6:30pm for Christmas Eve. Some mid-week showings are still looking good with decent seat availability. This might be my chance to see it. I’ll have to play it by ear.

For the last two years I’ve avoided any mention, story, detail, even single words that might have anything to do with the latest Star Wars movie. I just don’t want to encounter any spoilers and when I do actually see the movie for the first time, I want it to be most the fresh experience. I don’t want to know what is going to happen before I see or hear it.

The task was easy early on as the last crappy movie from JJ Abrams faded from people’s memory. It became more difficult though as the new movie started production and the hype started. It got exponentially more difficult once the trailers started showing up. I’ve avoiding them all so far but I ran into a bit of a problem on Sunday night. I was watching the latest Thor movie when the last Star Wars trailer played. I could do nothing but look down at my popcorn and tried to not to listen to anything. I was somewhat successful as I didn’t see any of the images and spaced out enough to not know who was talking most of the time.

The most dangerous time now approaches however. The movie comes out this Friday. There are already people on this planet who have seen it through advance screenings. With social media being ubiquitous these days, the risk of the story being spoiled is great. I feel like on Friday and until I see the movie, it’s best that I avoid all social media and as much as the Internet as I can.

May the Force be with me.