I’ve been back at EA a few weeks now, working with many of my old co-workers. Nearly all of them never left EA. When I got laid off in late 2010, they stayed behind, learned some new technology, helped make some new games, and stayed the course at EA.

I never really thought about it until recently but these people continued to get promotions, raises, bonuses, stock awards, and various other perks that you get when you stay at a full-time job. In contrast, I haven’t received a promotion since late 2006 or so. I guess that’s not hard to believe when I haven’t worked at a single job for more than nine months since 2010. In the last seven years, I think I’ve only gotten one bonus and that was at PopCap in 2012 when I got the company-wide quarterly bonus.

The trade-off is that I received a wide breadth of experience. I’ve had the chance to work with many different companies and on different platforms, from tablets to consoles. I’ve worked on games targeted to women over the age of 30 to games made for males ages 17 to 34.

It definitely fills my resume with a variety of experience but there’s no doubt that from a pure financial point of view, I am a less wealthier person for not having stayed in one place, like my co-workers did. I do not lament my nomadic ways though. I’ve met a lot of great people and in the end, I’m still able to put Hamburger Helper on the table every night.

I usually like the ones where they have to blur out a children’s cartoon but this one is pretty good too.

It was quite a surprise to me that I was remarkably thin before I started work at the beginning of this month. I tipped the scales at 155 pounds at the start of March. All my pants were very loose which was all kinds of awesome. It’s a great feeling when you know you’re at a good weight. I wasn’t expecting to be at that weight because I was at the end of my five month vacation, had been eating whatever I wanted and also had just come back from San Diego where I ate quite decadently. Somehow, I remained thin.

Tomorrow marks the end of my fourth week at work and there are signs I might be getting tubby again. I weighed myself yesterday and I’ve gained two pounds. It’s not a lot of weight but of course I would preferred to have not gained any weight at all. Without fail, I always gain weight whenever I go back to work. I bet if I stopped working right now, those two pounds would melt off in less than two weeks. I attribute the weight gain to mostly my diet. I generally consume more food when working. My body just seems to want more food when I have to work. I try my best to eat smarter. For breakfast, I try to only have scrambled eggs and no bacon nor hash browns. For a while, I was eating just salads at work for lunch. Where I probably failed was for a few days in a row, I had a big jelly doughnut for an afternoon snack.

There’s a new week and a new month coming right up, so I’m going try to get back on track. I really want to avoid what happened when I worked at PopCap and weighed a very shameful 175 pounds.

UPDATE: Not six hours after I made this post, I found that my tax refund was deposited into my account. I was worried about nothing!

On Friday, it will be two weeks since I filed my tax return over the Internet. In that time, I have heard nothing from my illustrious government about my tax situation. Like in years past, I used a tax program to do my return and I was marked for a tax refund. The last tax year was not remarkably different from years past. My sources of income were essentially the same and my deductions were also the same. The only slight wrinkle was that I had income from Employment Insurance but so did millions of other Canadians and that’s something the federal government would have experience with. Usually, I get my refund in about five business days, so this delay is out of the ordinary, if years past are any indication.

I could speculate what this means but checking with Canada Revenue Agency website yields no answers. Stupidly, the website goes down for maintenance for three hours every day at midnight and of course, I didn’t check it until 10 minutes after midnight. I’m not staying up until 3am to get any answers so some potential light on this situation will have to wait until morning.

I’ve never been audited and I hope this isn’t what is going to happen. I have nothing to hide but I really don’t want to go through the hassle anyways. 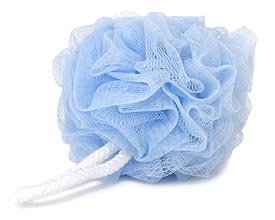 As many of you know, I use a pouf, like the one pictured above, in the shower. I don’t use bar soap and have been using body wash and a pouf to wash my body (including my genitals) for many, many years. For the most part, I have found poufs to be durable and well-constructed. I never really looked at them in detail but everyone seemed to be constructed in the same manner. The pouf material appeared to be stitched together in the middle to hold it into the ball shape. I’ve used poufs for months at a time, probably way longer than I should have but that was a testament to their durability. Other than the shape being slightly stretched out, they were long-lasting products.

This all changed when I replaced a pouf several weeks ago. Not a week into using it, it unraveled on me, into a long, useless string of pouf material. When I looked closely, the material had not been stitched together in center but rather, just loosely tied together to form a ball. I couldn’t figure out how to get it back into a ball shape that would stay together. Every time I tried, it would always fall apart again. I decided to trash this one and just buy another one. Lo and behold, the same thing happened to the replacement pouf. I again bought another pouf but this time from a different store. My luck was no better, it also fell apart on me.

I get the feeling whoever is making these things fundamentally changed the manufacturing process very recently. Without the stitching, they fall apart very easily now. I wonder if I can find the old style poufs anymore. This feels somewhat reminiscent of when Elaine went looking for sponges.

A few weeks ago, I requested VPN access to the EA network and today was I was granted that. What that means is that I can now check my work e-mail away from the studio and using remote desktop, work from home. Having such access is a double-edged sword. While having VPN access allows you to respond to messages quickly, keeps you aware of potential issues even while away from work, and can make you more productive, no one can dispute that you’re essentially working more and doing so on your own time. The key to using this access properly is using it in a smart way. Some of the tasks I do on a near daily basis involve kicking off a build, which means my computer has to crunch away for several minutes as it constructs the latest version of the game. For the most part, I can’t do anything while this happens, so it’s not productive time. If can get this going before I head off to work, the build will be ready for me once I arrive at work. That’s just once example. Now I’m sure some of you out there are thinking I’m a fool for giving up that time where I can surf the Internet while my build is going.

I used to have VPN access at EA starting way back around 2007 or so. It was a bit different then. I was given a physical token generator which generated an authentication code every 60 seconds. I kept this thing on my key chain for years and only surrendered it when I got laid off in late 2010. This time around, the authentication code is now generated by an app that’s on my phone. It’s cheaper and more convenient to do it this way since you don’t have to hand out physical tokens anymore. It’s interesting how smartphones continue to make life easier(?).

Funny man Will Ferrell appeared on Jimmy Fallon’s show last week to promote some items for a company he’s now working for. Rather than be sneaky about the deal, he was very open about being a pitchman.

Though I am settling into the routine of being back at work, I’m still finding it a bit tough to get up in the mornings. This is happening despite the fact that I’m in bed between 12:30am and 1am on most nights and get up around 8:30am. That’s a very early bedtime when you consider in my previous working days, I’d go to bed around 2am and get up at about 8am.

Perhaps it will take another few weeks for me to adjust or perhaps I’m just getting old. Not sure what it is. The only good thing is I usually don’t have that afternoon dip where I get tired a few hours before going home.

Well, I better head off to bed.

I recently wrote about the demise of Redbox in Canada, which was my main method of watching movies after their theatrical run. Now that Redbox is gone, I’m faced with the reality of having to pay triple the price to stream movies in HD for $6 online. Sure, my workplace has a library that stocks relatively new Blu-ray discs but waiting for one copy of say Big Hero 6 to become available amongst hundreds of other employees isn’t ideal.

I saw a torrent for Interstellar on the weekend but I resisted. I don’t want to go that route. What a wonderful first-world problem this is.

US President Barack Obama appeared on Jimmy Kimmel’s show recently and the host asked a question which needed to be asked. Kimmel inquired about the President’s knowledge of aliens. Interestingly, Obama did not flat-out deny knowing about aliens nor did he say aliens do not exist. He also jokingly said that “aliens exercise strict control over us”. I am sure that some conspiracy theorists will take statement more literally. When Kimmel finally was more insistent with his line of questioning, Obama said he “can’t reveal anything”. Again, that was not a complete denial of the existence and/or knowledge of aliens.

This maybe the fatigue talking but this short segment on a supposed comedy talk show may wind up being historically important in later years. Ok, I gotta go patch up my tin foil helmet, I suggest you do the same.