A good friend of mine sent me a link to site entitled “Listen to a Movie“. As you might expect, this site allows you to listen but not watch a movie. Technically, the site contains audio files for TV shows and standup comedy but the movies are the main draw. The site is perfect for putting it on the background while you do other things like work or other tasks. I recommend you listen to movies that you’ve already watched since hearing a movie that you’ve never seen before would really be confusing. Also, listening to a previously watched movie allows you to visualize the scenes in your head. Dialogue heavy movies are a good choice, like Pulp Fiction. Oh man, I can just see Jules pointing out the blood soaked towel that Vincent Vega used in the bathroom. Strangely enough, the site does not feature any silent movies.

The above video was almost assuredly shot recently in Vancouver as the grey skies and somewhat moist looking pavement indicates that this indeed our summer. The baby raccoons seem to be extremely peeved at the cameraman. If their mother wasn’t there to take them back, I’m not sure what would have happened. 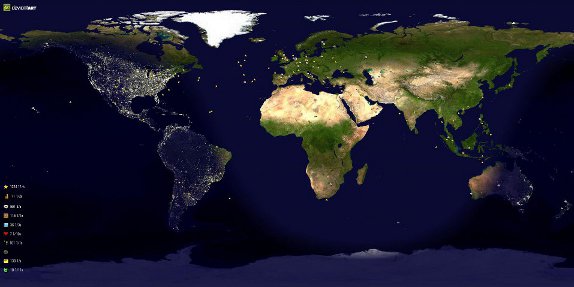 As I am a very simple person, I like looking at shiny things and things that move. Someone over at deviantART, where everyone who is a goth or emo artist posts all their art work, wrote a very cool visualization tool. It shows the real time activity that is occurring on their web site. The data is technically two or three minutes behind but that’s pretty close to real time. It’s pretty neat to see where all the activity is coming from and going to.

A few days ago I promised to write a letter to a friend. Instead of using modern communication via e-mail, Facebook, or instant message, I thought I’d do it the old fashioned way. I then realized I hadn’t sent a personal letter in many years, even a typed and printed one.

I was going to write the letter by hand in cursive. I can’t even remember the last time I wrote in proper cursive. In this day and age, we still print by hand but when was the last time you wrote flowing cursive? Do they even teach that in elementary school anymore? Call me a relic of the past but I think we should continue to teach children how to write by hand. It gives them a link to the past and gives them less reliance on a machine to do their writing. Also, should civilization end as we know it (by zombie or other means), people will still know how to document their brutal and meager existence without the use of fancy computers.

Film maker Daniel Brace decided to strap a camera rig to the head of his two year-old daughter Olivia before an intense session of hide and seek. The results are both fascinating and adorable. The video above shows us what happened during play time. Little Olivia plays the game of hide and seek on the edge, giving her father very little time to find a hiding spot.

For as long as I can remember the apartment unit closest to mine on my floor has been occupied by this older couple. I wasn’t sure if they were renters or owners but I’ve never seen them at strata council meetings so they must have been just renters. They would regularly leave their apartment quite early in the morning. When I was unemployed earlier this year and going to be at ridiculous hours, I’d sometimes hear the older gentlemen leave the apartment around 5am in the morning.

Earlier this week, I heard a bit more noise than usual coming from their apartment across my living room wall, that is to say there was actual noise since they were essentially silent all the time. I ignored it but then it continued and it sounded like furniture being moved or something. Curious, I stepped onto my balcony where right at the edge, I can partially see into their living room. It was there I realized that the couple had moved out, probably while I was in Montreal. From what I could see, there were boxes and bits of furniture arranged as if someone or some people had just moved in. Through various reflections in the windows, I could see at least one person moving about in the apartment but couldn’t make out if it was a male or a female.

I don’t know who my new neighbours are and if they are renters or new owners. I’m also not completely sure if it’s just two roommates or a couple. My bet is on a couple just by some of the furniture I saw in there. If I see them in the hallway, I will definitely introduce myself. Welcome to the 28th floor!

I was about two blocks from work this morning when I was at a cross-walk. There was only two other people with me. There was a guy my age and another older gentleman. The light turned green for us so we all started walking. The older dude took off ahead of us and veered off to the right to go up the street. I guess he was in a bit of hurry. I was about halfway across the intersection when I heard a commotion up ahead and to my right. I looked over in time to see the older dude trip on the curb and smack his head with a terrible thud on the concrete sidewalk. He had two books with him that flew out of his hands.

The younger dude and I walked over to see if he was alright. When we got to him, it was clear he was not ok. He had taken the brunt of the impact just above his right eyebrow. There was a flap of skin, possibly even flesh, cut loose above his brow. He had gotten up on one knee by himself but he seemed groggy. He began to complain that it was his damn shoes that caused the fall. I noticed one of his shoes were not laced up. He started to tie them up again but his wound started to drip blood onto the sidewalk. The younger dude and I looked at each other and silently decided 911 should be called. He pulled his phone out to start dialing. I turned my attention back to the injured who had managed to tie up his laces but was still continuing to drip blood onto the sidewalk and himself. It was then I noticed he might have also scraped and cut one of his hand as well. He started to stand but I told him that wasn’t a good idea and that we were gonna get some help.

The flap by the gash on his head was bright, bloody red and I could see a bump forming above his brow. By now the younger dude was talking to a 911 dispatcher who had asked us to find something press against the wound. We didn’t really have anything clean to do that with. Fortunately, the wound had stopped dripping. The older dude wanted to get up again but I told him it’d be best if he just sat along this construction fence on the sidewalk. He wasn’t exactly with it and I wasn’t sure if that was because of the fall or because he was a bit of a street dude (which his clothes seemed to indicate). People kept walking past us, tip-toeing around the blood, gawking at the guy’s open wound. Eventually, someone else stopped to help as well, it turned out to be one of younger dude’s co-workers. He thankfully had a package of tissues handy, which he gave to me. I pulled a wad out and helped press it against the dude’s head. He was good enough to hold the pressure by himself. By now I began to hear sirens in the nearby which was amazing. It’d be less than a minute since the younger dude got off the phone from 911 and there was already emergency units in action.

Both a small firefighter truck and an ambulance rolled up at exactly the same time. The firefighter truck had two dudes, while the ambulance had three people attending. One of the ambulance dudes was dressed in green hospital scrubs which was weird for me since I’ve never seen that before. The lead ambulance lady took control of the situation called off the firefighter dudes since I guess she determined five people weren’t necessary for a fall injury. They were really nice with him, collecting his books and walking him over to the ambulance. We got the go ahead to leave and we didn’t need leave any info or give any statements.

I had originally intended to get some breakfast to go  before heading into work and even the sight of blood had not turned my appetite, so I continued on with my original plan. Upon leaving the breakfast place, I saw the ambulance heading along Robson, which probably meant they were gonna take him to St. Paul’s on Burrard as it is the closest emergency department. I really hope the dude is ok. I’m not so worried about the gash as I’m sure that was cleaned and stitched up at the hospital. I am worried about a possible concussion or other internal injuries to his brain. I’m obviously no doctor but I’m wondering if he was held for observation for some time or submitted for further testing.

In any case, remember to stay safe out there and to help those in need when you can.

I am finally back home after a very enjoyable four days in Montreal. I am currently very tired after a long travel day. I need to get some sleep and catch up on all the E3 videos that I missed out while I was in transit. I’ll be back tomorrow.

The last time I was in Montreal was 24 years ago, which makes me feel like an old, old man. My aunt had six children which means she produced a lot of my cousins just on her own. I was in Montreal for the wedding of one of those cousins, one of the triplet cousins.

My triplet cousins are the youngest of the bunch and I think it’s been over a decade since I’ve seen any of them. The three older cousins I’ve seen a lot more since they’re out west frequently.

The wedding itself was a success and I enjoyed myself immensely. It was nice seeing all my six cousins, aunt, uncle, mom, dad, and grandma in one place. That’s a rare thing these days so it was quite special.

I’ve been here for three full days but I haven’t even begun to rediscover the city. There is so much to do in Montreal.

Anyways, I must head off to bed and sleep in this wonderful hotel bed for one more night.

I’m typing this from my seat at 34D on an Airbus 321. We’re about to push back from the gate. I’ll check in with everyone when I get to Montreal!