One of the benefits of running this little dog and pony show is that anyone can go on Google find my site. Over the years, I’ve had numerous former classmates find me and some even send a little message. I wonder about the people who don’t send me anything, but continue to read the site.

I’m pretty sure it was said in jest. Even if it wasn’t, those things in my intro aren’t even true anymore. About the girlfriend… oh wait… ok… well then there’s the car… no… yeah… well, that part about having a poor paying job ain’t true… I don’t even have a job anymore…

In a dazed stupor today, I began to let my mind wander. I daydreamed about James Bond villains for some reason. I thought, “What if we combined the evil Blofeld with the menacing Oddjob?”

Yep, we’d get the supervillain named… Oddfeld. Oh how I pray for sleep.

If you type in “virtual bartender commands” in Yahoo search, my blog entry comes up as the fourth result on the list. And I don’t even have the full list of commands.

I have no idea why, but tonight I’d like to remind everyone that the movie The Goonies holds a special place in my heart. The DVD of the movie is also quite excellent. And, someday, I’d like to go down to Oregon to see where they filmed it.

When it comes to the effectiveness of cleaning products, I trust the opinions of homemakers and parents with young children. If they say something is good for cleaning, you can bet it does the job. So, when a young mother, wife, and homemaker found the Mr. Clean Magic Eraser, she just had to write a positive review about it on her web site (for all her friends to see). Take note of the very first type of stain she says it’s good at removing.

I’d say the Magic Eraser is a must in any household! 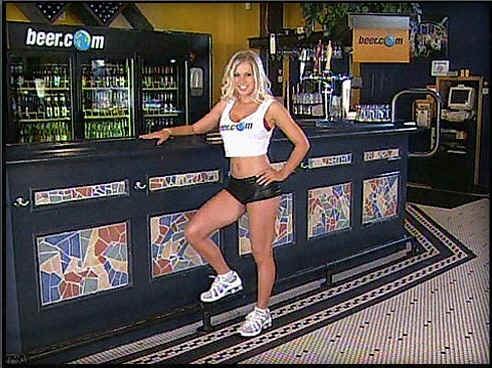 Yeah, I know a lot of you have seen this already, but I’m short on time and long on assignments right now. The folks at beer.com have come up with a virtual bartender, somewhat like that subservient chicken from a while back. In my opinion, this is way better.

You can give the bartender commands like beer, bottle, and cans. The fun stuff, however, has nothing to do with drinks. Try these commands for more entertainment:

There’s a lot more than what I just listed. Experiment for yourself!

This morning, I registered the domain tracytang.com. As some of you may already know, that just happens to be the name of my sister.

I’ve had my eye on that domain for almost three years now. As luck would have it, someone also in Vancouver had it. The annoying thing was the owner didn’t do anything with the site. At first, it just re-directed to another weird site. Then for the last year or so, it didn’t go anywhere. I actually thought I had a chance about a year ago, when the renewal date came up, but the owner renewed at the last minute.

This year though, I kept watching the domain status and I knew something was up when it lapsed beyond the renewal date. The catch is, just because it goes past the renewal date, a domain can still get rescued by the owner at the very last second.

This time, however, that didn’t happen. On Sunday morning, tracytang.com returned to the pool of publicly available domains such as extremelylargehooters.com. After receiving the final confirmation from my sister, I registered the domain on her behalf.

She still isn’t sure what she’s going to do with the domain, but for starters we’ve setup an e-mail account. Her e-mail address follows the same pattern as mine, so you can probably guess what it is.

We talked briefly about the other Tracy Tangs in the world who might have been interested in the domain. We know there’s a health care administrator in Florida with the same name. Strangely enough she’s not of Asian descent. Donna Changstein anyone? There’s also a Tracy Tang who is a successful publisher. She’s worked at many large companies like Penguin Books.

I wonder if they’ll come looking at the site?

I’m not sure, but I think I just finished my project proposal for my computer animation class. I didn’t expect to get that far, but here I am. I guess that’s what you get for not doing anything else all night.

On Saturday night, I went to Sushi Aoki for dinner. It’s located on W. Broadway, between Cypress and Burrard. I’d been there once before but I only had the yakisoba, so I knew nothing of their sushi. This time, I sampled some of their sushi and boy was it awesome. Their menus are quite helpful, chock full of photographs so you can see what you’re getting. I ordered a simple salmon and tuna sushi combo, and looking at the picture, I was expecting a satisfying yet not a bloated dinner. I was wrong.

When you get salmon and tuna sushi most of the time, you usually see a tiny piece of fish on top of some rolled rice. What I got was several large slabs of fresh fish on top rice. The pieces of fish were so large, I had to lift them off the rice to make sure there was something underneath. There was enough fish there that at some restaurants this would have easily constituted an order of sashimi.

My dining partners, Adam and Tyson, were also not expecting the large portions. Adam had a California roll combo and some tempura, while Tyson had a feast consisting of nearly every variety of raw seafood. We all got our asses kicked but it was so good.

There was one “interesting” moment though. As Tyson was sampling the various items from the sea, he came upon one selection that he said wasn’t that great but we should try and get our opinions. Keep in mind he had a rather mild response to this piece of seafood. I decided to try the mysterious item. It looked like a slice of raw squid to me. It was white and had the same texture all the pieces of raw squid I’ve seen in my entire life. I should have known better at that point, but hey, I’m a dumb guy. As soon as I put it in my mouth, I knew I had made a grievous error on my part. I’ve been eating sushi for almost twenty years. I’ve tried a lot of things but never have I had a piece of sushi that was so disagreeable. Raw squid tastes awful. There is a good reason why Greek people batter it up and fry it. To make things worse, the texture is slimy and chewy. I tried chewing as fast as I could to get it down, but it fought me every step of the way. My trouble must have been very evident because Adam and Tyson kept saying, “Are you alright?”

I finally managed to swallow the cursed piece of squid. After sipping some tea and regaining my composure, I managed to say, “Adam, that was really good… your turn”. The bastard guy wouldn’t have any of it.

So, other than the nasty squid experience, I must say that Sushi Aoki is an excellent place for sushi.