SPRINT TO THE FINISH

I have never pulled an all-nighter before, but I came pretty damn close last night. I worked pretty hard from after dinner on, but I was very effective after midnight.

I took only a few breaks for food and by 5:30am, I had finished a big question in my assignment. I rolled into bed around 6:15am and by then it was light outside.

Before sleeping, I briefly entertained the thought of going to my animation physics class at 9:30am. It was about only three hours away. It didn’t make any sense though, either I’d be sleeping in class for sure or sleeping in my bed. I chose to sleep in bed.

I set my alarm for 11am and I dozed off.

11am came way too soon and I got up kind of groggy. My assignment was due at 5pm. I had about six hours left to do as much as I could. My first thought was that I was thirsty and hungry. A cup of hot water slaked my thirst, but I had no food in my room. It was nearly lunchtime and I wanted to get a hearty meal that would last me until 5pm. I decided to get a burger from The Barn. They’ve got nearly a pound of ground beef in them. It took me less than 15 minutes to come back with my food.

After consuming my food, I started worked again until 12:30pm. I worked steadily throughout the afternoon. I was amazed. I was not distracted in the least. Usually my mind wanders quite a bit when I work, but not this time. I was very focussed. Around 4pm, I managed to hammer out the last two questions in my assignment, though I was missing parts here and there. The last part clearly was going to take several hours, so I was done.

At 5pm, I went to class and handed in my assignment. I won’t get an “A”, but no one can doubt the effort I put into it.

I am going to enjoy sleeping in tomorrow.

I’m going to need a shower when this is all over.

So this is what 5am looks like. Haven’t been here in a while.

The people from SJC who went out for St. Paddy’s Day just came home. A few people are inebriated. There’s some talk about underage dating. The drinking is continuing in the foyer. My assignment still beckons me.

By the way, Wikipedia… you are my saviour.

I DON’T WANT TO DO WORK

An hour ago, I completed my presentation here at SJC. It went very well. My friend Garrett (also a former tester) showed to listen as well.

I finished well within the hour. I think the audience was kept fairly entertained throughout. I wasn’t nervous at all and the words just came out naturally. I didn’t really work off a script so most of it was just casual remarks. All my demos went off without a hitch. The game crashed exactly when I thought it would.

The whole thing just reinforced my belief that as long as I know what I’m talking about, I like giving representations.

Unfortunately, I feel like doing nothing else this evening. This I cannot let happen since I have an assignment due this Thursday. It’s worth 10% of my total mark in the class, so it’s not a trivial assignment. The bad news is that I’m having a lot of trouble with. I’m probably going to have say goodbye to a huge chunk of marks on this one. I’ll probably won’t finish in time. It bothers me, but what can you do? This stuff happens sometimes in school. You just move on.

Until Thursday though, I have to keep at it, which isn’t something I feel like doing tonight. Well, you know me though, I’ll get back into the saddle in about a half hour or so. 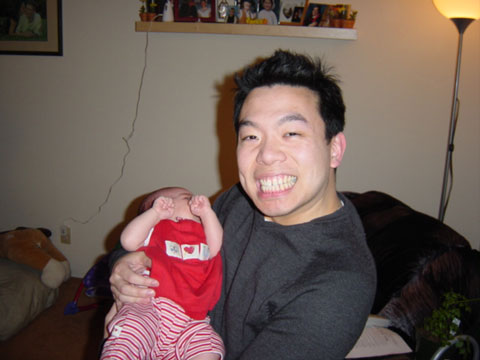 Well, actually I’m not. I was digging around the old mainframe and found this picture of me and Violet. She’s the daughter of my friend Ryan, who I still need to get a hold of. Ryan, I’ll be in touch soon, I promise.

Dinner was less than stellar tonight. I can’t describe in words my craving for a bucket of KFC chicken right now. I settle for chicken with only four special herbs and spices instead of the usual eleven.

My commitments for the day ended around 1pm. I was available for my own work right after that. Somewhere along the way, I took a long nap, heard about someone’s med school interview (at length I might add), took a shower, and cleaned my toilet. Before I knew it, it was 6pm.

I really needed to do some work. I sat down and decided I had to put some effort into my presentation that I’m giving next Tuesday. I managed to finish writing my material and then I gave Powerpoint a whirl. Keep in mind, I’ve never written a PP presentation before. After a little tinkering, I got a pretty good template up. By midnight, I had 38 slides written up. I’m a little concerned I might have too many slides. I need to time my presentation still. I also have a few demos outside of the slides which will take some time. I’m starting to get a good vibe out of this. I really want to make a kick-ass presentation. I hate making poor presentations. I want people to actually enjoy what I have to say. I’ll need to put a little more effort into it and I’m sure everything will be where I want it to be.

I’m happy the bulk of it is done. I’ve got a lot more things to do this weekend.

I think I’m about to ask them to leave. One of them is lying on my bed and eating chocolates. I think he’s putting the wrappers and chucking them on my bed sheets. This is getting out of hand. This guy behind me is starting to get on my nerves. I’m almost a mushroom cloud laying mofo right now.

Ok, I need to end this post and kick these guys out of my room.

For my birthday, my neighbour down the hall, Carolyn gave me a fish bowl and a single Betta fish.

I was really busy at the time, and my first reaction was like, oh… ok. I was thankful but I felt like I was in one of those movies where the gross, slobby bachelor suddenly gets custody of a precocious child. Then, through the course of caring for the child (with many hilarious incidents), s/he breaks through my gruff exterior, and I eventually learn the value of love and how to love another human being. Actually, I didn’t really think a single fish was going to do that.

Anyways, for several weeks I didn’t name my fish because I just didn’t have the time nor a good reason to name him something. As I got used to my fish and observed his behaviour, I noticed something really odd about him. Most fish that I’ve had all exhibited similar feeding patterns. You’d drop the flakes into the water and they’d eat every flake they could see. They wouldn’t stop until they had nothing left to eat.

My fish, on the other hand, would only eat like the first two flakes or so it saw. It would not eat any more than that. The rest of the flakes would go untouched. I wasted a lot of food at first. Now, I have to feed him flake by flake, or else the rest goes to waste. Since he eats so little at a time, I have to constantly feed him.

Thus, I came up with the perfect name for him. Picky.

I’ve been in my room doing work for about six hours now. Not surprisingly, I only have a small amount of tangible proof that I have been doing work.

I did some reading to understand how to do a question for an assignment. I wrote some code for another class that may or may not work. I loosely formulated a test plan for the software engineering project I’m doing. Currently, I am working on the outline of my lecture that I’m giving next Tuesday. It’s the one on video game testing. I’m finding more and more things to talk about. I am worried these details might get boring. We will see.

Earlier in the day, I bought some new Swiffer wet cloths. These ones have a citrus scent to them. This evening, I started Swiffering my floor. My room smells like an orchard full of oranges and lemons now!

I have been in my room too long tonight.