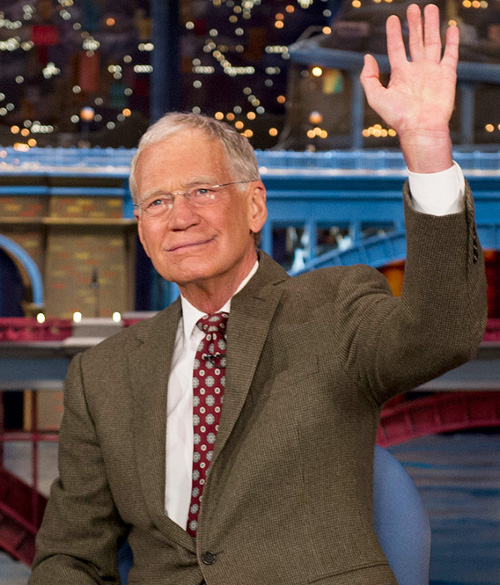 Tonight, talk-show host David Letterman will do his last show and retire after a long and legendary career. I will miss his style of comedy, his humour, and the great joy he gave me as a viewer. He entertained me for decades and I am thankful for that.

In 1982, he start hosting Late Night with David Letterman, on the heels of an ill-conceived morning show, which did not fit his unique style of comedy. I was far too young to watch Dave regularly back then but it was definitely his Late Night show that revealed to me, that this oddly funny man, David Letterman existed. It was his anniversary shows that really caught my attention and made me a big fan of his comedy. By the time I was in junior high, I would try my best to stay up late on Friday nights to watch him and sometimes tape his shows on the weekdays to view the next day after school.

Growing up, David Letterman, to me, had the most entertaining late-night talk show bar none. He was the best of the bunch. I say that knowing full well that Johnny Carson was still around at that time. Lest you think, I didn’t appreciate Carson, I certainly did. I used to watch a syndicated show that used to be on in the early evenings called Carson’s Comedy Classics. This show featured clips from The Tonight Show from about 1962 to 1982, which gave me a wide exposure to Carson’s best moments.

As funny and classy Carson was at 11:30pm, there was just something magical going on at 12:30am (then eventually 12:35am) with Dave’s show. His show was unorthodox, wacky, zany and often full of this weird energy that made you want to see what would happen next. Dave was fearless about doing stuff to get a laugh. He didn’t feel constrained with the traditional audience and studio set up. He frequently brought the cameras outside the studio, into the halls, down on the street, and in other locations. To me, he perfected the concept of the remote bit, leaving the studio in search of laughs. In this regard, he was especially brave, sometimes engaging with people he knew would draw sharp reactions but knowing full well it was worth it for the laughs. His attempt to deliver a gift basket to General Electric (at the time, new owners of NBC), remains a classic remote in the history of late night television.

It was this daring and “damn the torpedoes” attitude to comedy that made me a fan of David Letterman. He also adopted this attitude to other portions of his show, like when he interviewed celebrity guests. I get the feeling Dave wasn’t initially very comfortable or fond of doing interviews. In this day age, talk show hosts, for the most part, coddle their celebrity guests and throw them softball questions. Dave wasn’t like that back then. His interviews with Madonna, Shirley MacLaine, and Cher made headlines. I think it took a while for Dave to get used to all the parts of being a late-night talk show host. He famously used to wear white wrestling shoes, white athletic socks, khaki pants and a blazer as his hosting “outfit”. As soon as the show was over and the credits started rolling, he would often get up, take off the blazer, and toss it aside.

As the late 80s and early 90s rolled around, I was hooked on Dave’s show, as many were too. He had tremendous popularity amongst college students in America. For me, I was still in junior high and he made my summers tolerable. Summer vacations back then were very boring for me. I didn’t have a summer job, didn’t go to camp, and the Internet was still many years away. Often, the only thing I could look forward to each night was Dave’s show at 12:30am. What would happen on the show this night? What would the Top Ten List be? Was it time for another Stupid Pet Tricks? Would we see Chris Elliot? Would he strap another camera on the back of a monkey? Would a letter from Viewer Mail be from Vancouver? He kept me entertained when I desperately needed it.

In a just world, Dave would have gotten The Tonight Show, as Johnny Carson wished it to be. Alas, the world is not just and television executives can be some of the dumbest people on the planet. So, it came to pass that a big-chinned bastard got The Tonight Show instead and Dave moved to CBS, where he could finally have an 11:30pm time slot. I don’t blame Dave for moving, it was really the only option he had. He will have spent over two decades at CBS, the longest show he’s ever had. At The Late Show with David Letterman, Dave eventually got less unorthodox, a little bit less wacky, and perhaps got a bit more mature. The khaki pants, wrestling shoes, and white sports socks went away, replaced with a real suit and shoes and socks that you might even see a businessman wear. He didn’t stop being funny though. It was at CBS that Dave gave us the likes of Rupert Jee, Mujibur and Sirajul, Alan Kalter, and many other new bits. In the two decades at CBS, he became the elder statesman of late night comedy. Many of the new and younger players in the late night world, respect and to some degree worship Dave. As Dave’s retirement grew closer, the likes of Jimmy Kimmel and Conan O’Brien have paid tribute to him.

Though I’m sure Dave would have liked only his comedy to make the headlines, he was in the news for other things several times in his career. In early 2000, he had emergency heart bypass surgery. In 2005, law enforcement authorities discovered a plan to kidnap Dave’s son, Harry, and his nanny and hold them for ransom for $5 million. Lastly, Dave was also a victim of an extortion attempt from a jilted boyfriend. A boyfriend of one of some female staffers he revealed to have slept with. The extortion attempted forced Letterman to admit to his dalliances.

Despite these setbacks, he survived them all. As a testament to his popularity and people’s respect for his career, the last few weeks of his show have been cavalcade of high-profile guests to bid him a proper goodbye. From comedians, A-list actors, and to two separate US Presidents the accolades for Dave have been plenty. I was lucky enough to see Dave in person at a taping of his show in 2007. It was a life-long dream and I will treasure that experience for the rest of my life.

David Letterman, I wish you a wonderful and long retirement. Thank you for the laughs and for taking late-night comedy to places no one had ever seen before.