There’s a restaurant I like to patronize on Granville Street. It’s a seafood place. I love seafood so this establishment is right up my alley. They sell raw oysters, $1 per on a daily basis. I’ve gone there about four times now and each time I get a few of those raw bad boys. You don’t get to choose which oysters you get for these $1 ones but that’s ok. Every time they’ve been delicious.

I went there again today with a friend. We both got two raw oysters each to go with our main course. They were good and tasty. My albacore tuna was also very delicious. Of course, anytime you eat raw oysters you kinda roll the dice. In my case, most of the time, everything turns out ok. Today, things did not go in my favour. To be fair, it really could have been anything else that I had today. Maybe it was the tuna. Maybe it was the coffee I had at 3pm. Whatever it was, I had to make a couple of trips to the bathroom to clean out the old radiator. It was very mild and compared to the horrors I’ve experience before, this was just a minor inconvenience.

I’m going to continue to eat raw oysters because they are pretty tasty.

In less than a week I’ve dropped my phone from desk height onto concrete twice now. Luckily, it suffered no apparent damage, no thanks to the lack of a case or other protective covering.

I think dropping my phone left an impression on me because I had a dream where I dropped my phone again. In my dream, the phone was damaged horribly. The screen was all broken and I could see the innards of the phone. It was broken apart and in pieces but strangely enough in my dream, a call came in and I was still able to answer it but pressing a part of the printed circuit board. That didn’t make any sense at all.

I woke up before I could get any further into my dream. I do have a thin shell for my phone but I don’t use it because I like having my phone as small and as light as it can be. I’ll try using it for at least a day just to see what it’s like.

Just before noon, a coworker came over to the area near my desk and looked out the windows next to me. He had heard from someone that a shooting had occurred close by and he was trying to see if the crime scene was visible from our studio. We couldn’t see anything but it turned out the shooting happened about a block and a half from where we were.

Apparently the suspect shot the owner of a bicycle store just outside a Starbucks. Plainclothes officers just happened to be in the area and gave chase. The suspect then jumped onto a bike and proceeded down the seawall. Other police officers intercepted the suspect near Science World, a popular attraction for kids. There was an exchange of gunfire, during which the suspect was shot and incapacitated.

The video you see above is from near the original crime scene. You can see the suspect on the bike. The two people chasing after him are the plainclothes officers. It is unclear who fired the shots you can hear in the video.

This morning, Microsoft announced they are making Halo: The Master Chief Collection for the Xbox One. This game is a compilation of Halo 1, 2, 3, and 4 all running on the Xbox One. These games have never been available on Microsoft’s newest console, so this is the only way gamers can experience those titles on the latest hardware. In particular, Halo 2 is getting a high-definition makeover, so it will look unbelievable compared to its original incarnation.

As with any time your game is publicly revealed for the first time, you get nervous about how the public is going to react. The Internet usually provides a healthy level of disdain for almost anything but I was pleasantly surprised this morning. The reaction has been overwhelmingly positive no matter where I have looked. In fact, a fair number of people have stated they might buy an Xbox One just for this game. It’s amazing that a series of four previously released games is what would finally make some people jump to next-gen hardware.

The video you see above is showing the actual user interface that we’ve been developing. We did a bit of work for E3, so the state you see it in is pretty much how it is now. We still have a lot of work to do so it’ll be a race to the finish.

This is certainly the most high-profile game I’ve had a chance to work on. I just hope we live up to the Halo standard set by the previous games.

As I’ve mentioned in previous posts, the game I’m working on will be revealed this morning at the Microsoft E3 press conference. It will be demoed live on stage with an audience of possibly tens of people but probably not more than a hundred. This is the first time a game I’ve worked on has been shown live on stage at E3. I just hope it doesn’t crash in a part that I worked on. If it does, I will be very embarrassed.

The links aren’t live yet but you can watch the press conference as it happens at 9:30am. I’m not sure where my game slots into the schedule but I’m hoping it will be near the beginning. This link should provide you a live stream. I’m super excited!

Several weeks ago, a good friend of mine and I decided we should make use of some coupons and eat fried chicken together. We settled on eating some of Church’s Chicken, which has for the last year or so, become my primary choice of fried chicken, replacing KFC.

We’ve already picked out the coupon we want to use. We’ll be getting 12 pieces of chicken for $20. That’s a fairly good deal in my books. For those who are good at math, you might have deduced that will leave six pieces of fried chicken per person. That might be a lot of chicken to eat in one sitting. There is a precedent however. Several years ago, the same friend and I split a 15 piece bucket from KFC. I ate seven pieces and he cleaned up with eight. We both felt terrible afterwards and it remains one of the most interesting things we’ve done as friends. So, six pieces should be no problem right?

Wiser people would just have a more reasonable meal but I don’t think my friend and I are those type of people.

So I went and looked at the crow’s nest from underneath, right at the base of the power pole. The nest is a lot larger than I had thought. The transformers hide much of it. It’s also difficult to see but I think I saw at least one baby crow in the nest. I’m going to bring my binoculars to work tomorrow to get a better look.

If there are indeed baby crows in the nest, the parents don’t seem to mind all the activity down below. There are people walking by and eating at restaurant patios, and most people don’t even realize the nest above them. I’ll try to get more photos tomorrow. 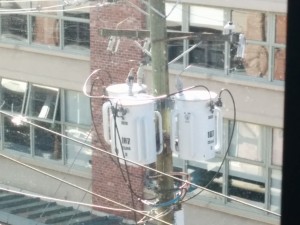 A few days ago, a coworker and I noticed a crow hanging out on a wire next to our fifth floor window. Birds don’t usually hang out next to our windows so this was something we’re not used to seeing. I thought this crow was just resting, as birds tend to do on wires, so I didn’t think about it beyond that.

This afternoon, I looked out my window and noticed two crows had built a nest amongst a set of transformers near where I saw the original crow. You can’t really see it in the thumbnail, so click on the picture to embiggen it. The nest is wedged between the pole and centre transformer. It seems to be made of mainly sticks. If I were a crow, I’m not sure if I would have selected that location. There’s a lot of foot traffic below. Compared to a busy street, there are fewer cars but lots of people day and night. I’ve seen crows get really protective of their nests before when they put them close to foot paths or sidewalks. They’ll divebomb people who get too close. I’ve heard they are intelligent birds but they easily could have observed how many people walk by a potential nesting site and decided it was too busy. I believe we might get some dive bombing here. Stay tuned.

Like most aspiring entertainers in LA, people sometimes have to take whatever jobs they can find before they hit it big. Conan was one of those people. In the video above, he did a gig for the National Association of Music Merchants. 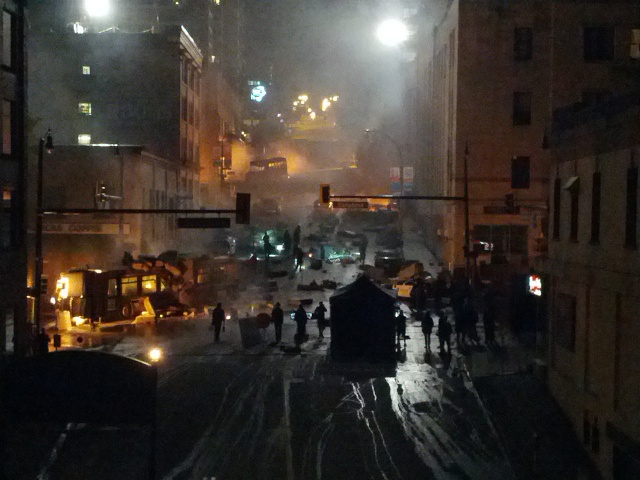