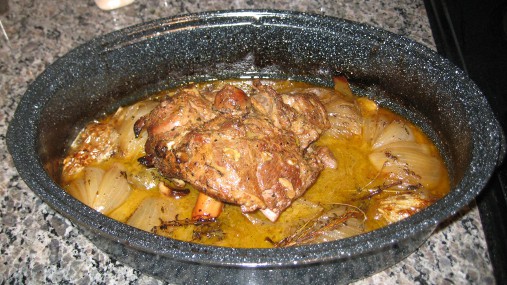 I mentioned previously that one of the goals I had with my time off was to learn to create new culinary creations that I wasn’t capable of previously. I’ve documented my initial experimentation with a slow cooker but my next dish was something a little bit more ambitious. I’ve always been a big fan of Greek food. In particular, I like the Greek style of cooking meat. Whenever I go to a Greek restaurant, I almost always get the roast lamb. Greek style roasted lamb is so delicious. The meat is tender and flavourful, and is usually cooked in this rich and tasty broth. I was extremely excited to make this myself as it’s one of my favourites.

Not knowing what to do first, I had to start with a recipe. There were lots to choose from on the Internet. Some seemed a bit too complicated, so I tossed those out. I settled on a recipe from a person of Greek descent and a fellow Canadian to boot. The list of ingredients wasn’t too exotic. It’s interesting to note though that I had to buy fresh herbs for the first time in my life. The toughest thing to buy was the actual leg of lamb itself. Most meat departments at supermarkets have only lamb chops at best and getting a leg of lamb appeared to be a difficult exercise. I lucked out at the Safeway below my apartment when they suddenly put two legs on sale. It might have been one leg cut in half though, as each part was only about 1 kg or 2.2 lb in size. It didn’t matter to me though as for this experiment, I was only feeding myself.

With all the ingredients and cooking implements in place, I started following the recipe. It was all pretty straightforward. Once I got the lamb into the oven, I realized I was going to baste meat for the first time, a personal culinary milestone. It took about three hours in total to cook the lamb, so it’s definitely not something you just make quickly. Once ready, I was also very careful to let the lamb rest. Letting meat rest was something I discovered while I was reading the recipe for the first time. Essentially, you need to let large cuts of meat to sit and cool down slightly before you slice into the meat. Not doing so leads to the juices of the meat draining away, leaving it too dry. To be extra careful, I let the lamb rest for over 20 minutes.

Once it was ready to eat, I didn’t really have a plan, I just started cutting off hunks of meat and put it onto my plate. I also spooned up all the juicy goodness in the roaster and covered the meat with it. My first impression was that it smelled great and luckily that carried over to the taste. All the spices, herbs, olive oil, and lemon juice made it absolutely delicious. I know the recipe called for the juice of two lemons but since I liked my lamb a bit more tart, I added an extra lemon. This perhaps was a mistake as it was bordering on a bit too much. It didn’t ruin the lamb at all but something to think of next time. My other observation is that while some of the meat was very tender and juicy, there were some bits that seemed a bit tougher and drier. I’m still not sure why that was as I had cooked it long enough that the meat was falling off the bone. I can only think of a few things that I could change to prevent this next time. I could baste the meat more often to ensure it remains moist. I could reduce the cooking time. The recipe listed a three-hour cooking time for about a 6 lb leg and I had about a 2.2 lb leg. Here’s the interesting thing though. All the lamb that was left over was extremely tender and soft when I re-heated it the next day. I am uncertain if the re-application of heat to get it hot again, led to more tenderness.

In summary, I’d classify this experiment as a success. I ate all the lamb by myself in about a day. It was indeed very tasty. As you can see above, it looked great too (click to embiggen). I’d definitely will make the lamb again. The only thing that would give me pause is the cost of the lamb. It cost me about $25 for the lamb meat which is up there in terms cuts of meat. I’d like to see if Costco is cheaper or something. In any case, looking forward to the next time!