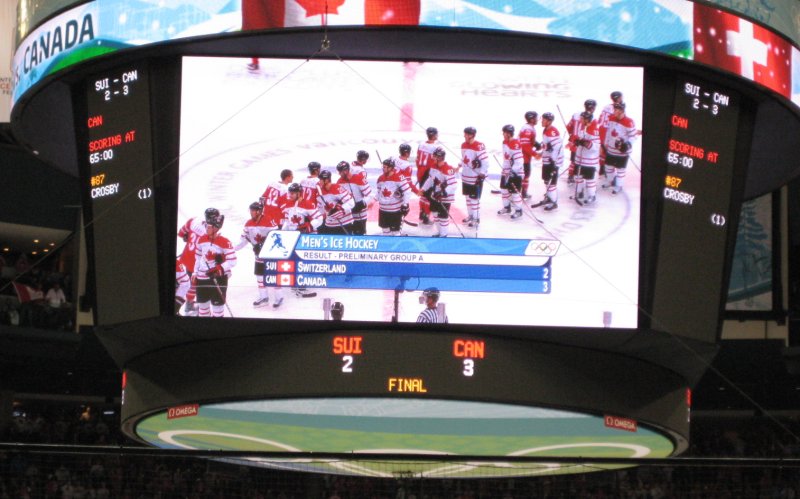 Today I attended my very first Olympic event as I had a ticket to the Canada vs. Swiss men’s ice hockey game. At the game, I was going to meet up with my sister’s boyfriend and a mutual friend of theirs.

Since I didn’t know how bad transit and the security checkpoints would be, I left plenty of time to spare. Skytrain heading west was definitely crowded, especially for a Thursday afternoon. While it was crowded, it didn’t prevent me from getting on the first train that arrived. I even had the luck of getting on the same car as Gordie Robertson, one of the members of the gold medal winning Canadian hockey team in Norway back in 1952. The 83 year-old was quite gregarious on the train and had his gold medal with him, allowing me to come closer to a gold medal than ever before.

It turns out that clearing security wasn’t a big deal at all. Since I didn’t have a bag, I was able to use the express lanes where I didn’t even have to wait. I went straight to one of the many open lanes where I emptied my pockets into a tray, airport style. I then proceeded through a metal detector and then collect my belongings on the other side. I breezed through in less than 30 seconds.

What did take long was what awaited me afterwards. Spectators that cleared security are herded into a waiting area just outside Canada Hockey Place. The reason for this there is usually a game going on beforehand and officials needed to clear out the arena before letting spectators in for the next game. So I, along with many other people, waited. We waited for well over an hour on our feet. Once we were allowed to proceed, we were in for more patience testing procedures. Though there were hundreds of people in this waiting area, we all needed to go up a single, narrow staircase that crossed the street and then went back down to street level to the arena. It took me fifteen minutes to get to the staircase from the time people were allowed to proceed.

From there it was clear sailing into the arena as I didn’t even have to wait to get my ticket checked. My seat was excellent, lower bowl, row 17 at one of the ends of the rink. During the warm-up, I remarked at the amazing job VANOC had done with transforming GM Place to Canada Hockey Place. Usually, GM Place is the home of the Vancouver Canucks. As such, the arena is decked out in everything related to the Canucks, from logos to signs to colour schemes. Canada Hockey Place, however, is now a completely neutral site. There is not a shred of Canuck materials visible anywhere. Everything inside and outside the arena has now been branded with Vancouver 2010 images and colours. If you didn’t know any better, you’d be hard pressed to even guess which NHL team usually plays here.

I was also impressed with the business-like nature of conducting an Olympic hockey game. There are no national anthems to be sung. There are no pre-game ceremonies. There are no video introductions to be watched. There are no corporate sponsors to thank. After the warm-up, the starting lineups are announced and then the puck is dropped.

Now for the game itself. I got worried about five minutes into the first period and the worry never left me the entire game (even when Canada was leading 2-0). On the official scoresheet, it will read as a Canadian shootout win over the Swiss but let’s face it, the real winners here are the Swiss. The Swiss team played a near perfect game for them that followed their strategy down to the letter. They needed to rely on a hot goalie, keep close to the Canadians, and capitalize on their chances if some came their way. That’s exactly what they did. If I were the Swiss team, I’d be going to bed tonight thinking the Canadians were certainly beatable.

Whatever chemistry, flow, and confidence that Canada exhibited in the last two periods against Norway was visibility lacking in the game against the Swiss. Their passing was not crisp. Some defensive giveaways gave people like me in the stands fits. They passed way too often in situations that just called for a simple shot. Meanwhile, the Swiss did all the little things right, seemingly winning all the small battles for the puck. They also appeared to be in the right place on the ice, exactly at all times.

The Swiss are currently ranked 10th in the world in hockey. Canada made them looked potential world champions tonight. After I left the game, there was a lot of cheering going on in downtown Vancouver. I wasn’t in a cheering mood as tonight’s game made me realize there might be some difficult times ahead for the men’s team. Canada will face the US on Sunday and let me be clear, the US are a far better team than the Swiss. If the same Canadian team shows up on Sunday as it did tonight, they will get a beating on the ice that will embarrass Canadian hockey throughout the world.

Despite my disappointment in the Canadian team, I was otherwise delighted to be at such a high-profile Olympic event, something I’ll never forget. Thanks once again to my little sister for making that happen!

One thought on “WORRISOME VICTORY”