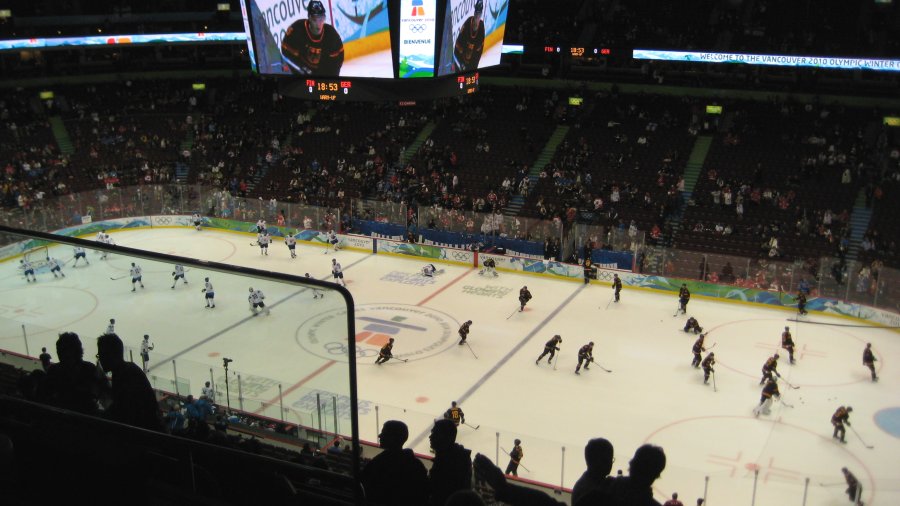 Through luck and the generosity of others, I managed to go an Olympic hockey game for three straight days in a row starting on Thursday. The game on Saturday night was a complete surprise as I didn’t even know I was going to that game until less than three hours before game time. A friend of mine suddenly got three tickets when someone he knew couldn’t use them. He decided to give one ticket to me and another to my co-worker.

It turned out we had tickets to a women’s ice hockey game out at the Thunderbird Arena at UBC. My two previous games were at Canada Hockey Place, so I welcomed the change in venue. The rink out at UBC is much smaller than CHP but it’s much more intimate so you can really see the action up close. The concessions are also much more reasonably priced out at UBC. While you’ll be ripped off for food and drink at CHP, the items out at UBC don’t appear to have an “Olympic” premium placed upon them.

The game itself was between Russia and Slovakia. Both these teams aren’t on the same level as the US and Canada but it was an interesting game nonetheless. Early on, it was clear that Russia had an edge on the Slovakian team which caused me to cheer for the Slovaks the entire game. In the end, Russia won 4-2. The Slovakian goalie was very busy and played very well. She was a victim of a few unlucky bounces.

After the game, we just left the campus as the arena is really the only Olympic thing out there. It’s weird since if you exit CHP after a game, it’s downtown and there’s everything related to the Olympics around you.

My luck ran out today as no one offered me tickets to anything! Though to be honest, I’m kinda glad I didn’t get to see Canada play the US today. It was disappointing enough to watch it at home, I can’t imagine how much it probably sucked to watch it live at CHP.

2 thoughts on “THREE DAYS OF HOCKEY”