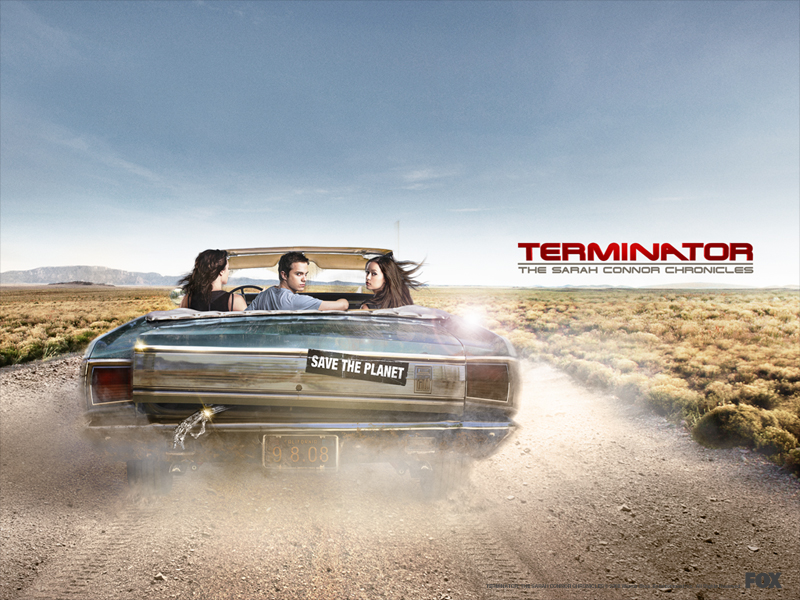 It’s over. The show has been canceled. The disappointment is huge. I’m still not sure why Dollhouse got picked up and Terminator got the axe. Fox has again made a baffling network decision. It appears the most important requirement of being a Fox network executive is to have a lack of common sense or at the very least transparency with the public.

Do you want to save T:SCC? Things are looking grim now, even after a spectacular season finale. These are things you can do. Do it now! Tell your friends! Contact the people and companies below. The info came from the Fox Terminator wiki.

Preston Beckman of fox, the physical mailing address for Fox is:

and makes sure you check this website for updates:
http://terminatorwiki.fox.com/?t=anon

finally please click this link and vote for TSCC

My favourite new TV show from last season was a little production called Terminator: The Sarah Connor Chronicles from the Fox network. Given a shortened nine episode run, it was the highest rated new scripted TV show last year. Greenlit for a second season, it’s currently just past the halfway point of a 22 show run this year.

The show smartly ignores the events of third Terminator film, which in my mind, was a disappointing piece of cinema and this is coming from someone who is a huge fan of the Terminator mythos. Chronicles picks up the story when the iconic character of John Connor is a teenager in high school, now several years past the events of T2. His mother, Sarah, is still protective of her son as ever and together they have a disfunctional mother-son relationship. Rounding out the main characters are Cameron, a sexy female Terminator sent back in time by John to help protect his younger self, and Derek Reese, John’s uncle, who was also sent back in time to aid his newphew. Together, they attempt to achieve two goals: prevent Skynet from being built (thus preventing the war with intelligent machines) and keeping John alive (so that if they fail their first goal, he can lead the human resistance in the future).

Chronicles takes a few liberties with time travel compared to the films. In the films, sending back a Terminator or a human back in time was a very rare event. Usually, it was done in pairs: one bad guy and then one good guy. In the show, we find out that Skynet sent dozens of Terminators to many different years and the human resistance has followed suit. Also, in the films, the targets were always either John and/or Sarah. In the series, we discover Skynet wants a whole bunch of people dead.

I’ve developed into a big fan of show for several reasons. First, it’s just cool to see more Terminator fiction. It’s an awesome premise that still fascinates me to this day. Second, I enjoy the action the show delivers. It’s always fun to watch two Terminators fight it out. Last but certainly not least, the show is well-written. For all the action in the series, it’s the smaller moments that stand out in my mind. One example was from last season, where Derek takes John to a park where they have an ice cream on John’s birthday. As they talk, they watch two little boys, brothers, play ball. After a few minutes, John realizes one of the boys in fact, Derek, before he goes back in time. The other younger boy was no less than Kyle, John’s father, whom he had not seen before in his entire life. For over two decades, I wondered what the moment it would be like when John saw his father for the first time. The show answered that question for me.

So why do we need to save Terminator: The Sarah Connor Chronicles? Starting in the new year, February 13 to be exact, Fox is moving Chronicles to Friday nights. History shows that Friday night is where TV shows go to die. There has been exactly one show that ever truly succeeded on a Friday night and that show was called The X-Files. As a Canadian, I’m not sure what I can do to support the show. I supposed I could buy the episodes on iTunes. Or I could buy season one on Blu-ray. That sure would be a good excuse to buy another Blu-ray disc. Perhaps, I could do an old-fashioned letter writing campaign. If you’re an American fan, you’ve got more options. You can do the above, plus your viewership counts, just watch the damn show on your TV. Also, you’ve got enviable access to hulu.com where you can watch the episodes for free and Fox does notice how many people watch on that site. You can also watch every episode for free on the official Fox Chronicles web site.

If you’re a fan already, keep watching on February 13. If you’re not a fan and are interested, I’ll even mail you a DVD with all the episodes so far on it. Please help me save this show!

4 thoughts on “SAVE SARAH CONNOR”