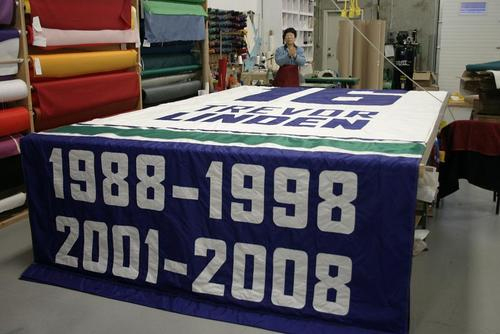 Tonight the Vancouver Canucks organization will honour arguably the best all-around player to have ever worn a Canucks jersey. Trevor Linden will have his #16 retired and a banner will be lifted to lofty heights at GM Place. Since 1988 no other player has worn #16 in Vancouver and after tonight, no other player will get that chance.

If you’re a regular reader of this blog, you’ll know I don’t conceal my support for Linden. I am an ethusiastic fan of Trevor Linden, the person, who just happened to have a pretty good hockey career. I made posts about his last NHL game and about his retirement annoucement.

I understand that if you’re not from Vancouver or only have lived here for just a few years, you probably are wondering why there’s so much whoop-dee-do for a pro athlete who managed to make millions playing a sport. To describe Linden as such neglects the much larger aspects of who he is. For the past twenty years, he’s been a tireless worker in the Vancouver community, helping charitable organizations and raising money for good causes. His work with sick children is the stuff of legends here in British Columbia. I can say without exaggeration that you could find hundreds of families who were deeply moved by the work Linden has done. Whether that work included raising money for a hospice or just talking to a terminally ill child for half an hour, you’ll find similar stories of his generousity. I’m afraid my words cannot do justice in describing what he’s done for the province. If you watch this video, you’ll get to see what Linden meant to just a single family.

In this day and age where pro athletes get too much attention and ultimately too much adoration for the wrong reasons, I am so pleased that we can still honour decent individuals such as Linden. He deserves every accolade and every standing ovation that he will undoubtedly get tonight. Such is the rare time when we get to collectively thank the great Trevor Linden.