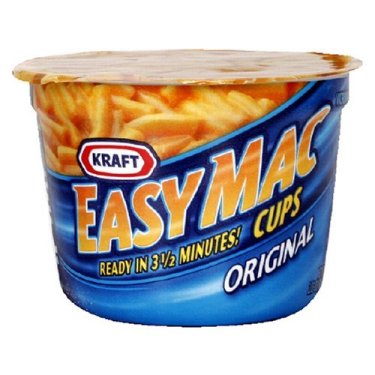 When I was younger, before my teens, I used to ask my Mom to make us Macaroni and Cheese once in a while. She was very hesitant as I believe she thought that Mac and Cheese were for poor people who couldn’t afford meat. She must have had some pride in not having to resort to cheap meals for her children. I recall she finally relented one day and we bought a box. She only made it as a “snack” after “real dinner” though. I remember it being ok and not the best thing ever. I don’t think she ever bought it again.

Then in my university years, where people do most of their Mac and Cheese eating, I strangely avoided eating Mac and Cheese the entire time. While I certainly wasn’t a rich student, I wasn’t exactly looking for loose change either. In fact, I have to say I ate pretty well during my university days.

Fast forward to the present, where I actually have a job and a career. A few weeks ago I was at Wal-Mart when I saw these small, round little containers of Mac and Cheese. They were single serving portions of Mac and Cheese, designed to be prepared in the microwave and in less than three and a half minutes. Clocking in at just over a dollar, it was something I just had to try.

Bringing it home, I discovered it actually takes way less than 3.5 minutes to make. The key is to have a hot water dispenser at hand. Since that water is nearly boiling anyways, if you add that to the cup, you can subtract about 1.5 minutes off the microwave time. So with just two minutes of ‘waving, I took the cup of tender noodles out of the oven. The next and final step was to just stir in the packet of chemically delicious cheese powder. Once all stirred in, it directs you to wait a minute for the cheese sauce to congeal somewhat.

After the long minute, I discovered Mac and Cheese tasted better than anytime I’ve had it before. With just 60g of pasta, I was ready for some more. It was so delicious and convenient! Since then, I’ve bought several more cups. If I see a pallet of these things in Costco, I’m buying one.

It took me several decades and a small cup to finally appreciate Mac and Cheese but I’m finally there. Maybe this means I can afford a bigger mortgage!

3 thoughts on “MAC AND CHEESE”