During my vacation in Hawaii, I learned a few things about Hawaii that I did not know before. For example, “ewa” means the west direction. “Diamond Head” refers to the east direction. “Mahalo” means thank you. A “lanai” is a porch or balcony. Thus, if your hotel lanai faces the ocean, you’ve got a good room.

The lanai for my hotel room was small and afforded me a “city view” which essentially meant it faced the worst possible direction, namely towards the island. While the visible mountains were sorta pretty, there was no water to be seen from my lanai. Here’s what I mainly could see. 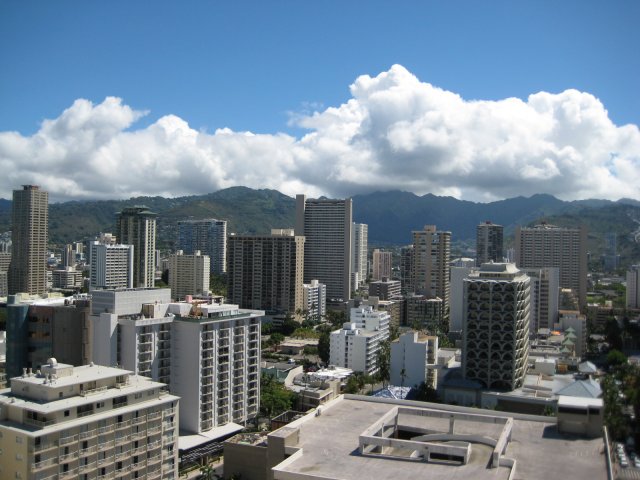 What was interesting was that at night, I could actually see into many other hotel rooms in the area. With the beach area so densely packed with hotels, looking left and right meant there was no more than about 70m between myself and another hotel window. There was an especially large hotel off to the right of my lanai and I’ll be darned if a lot of people didn’t close their drapes at night. Now, I’m no perv… ok, so maybe I am a little but I certainly wasn’t out there every evening with binoculars hours at a time. I just took note that yes, you could see a lot of people going about their clothed business in the evening in their hotel rooms.

So on one of the very last evenings I was in Hawaii, I was waiting for Ron to come to my hotel. We were going to have a few drinks. While waiting, I decided to get some fresh air and stepped out onto the lanai. Looking to my right, I saw people in the hotel next door doing mundane things. Some were packing, some were sitting out on their own lanais, and others were watching TV. Then one window caught my eye. There appeared to be a woman in her underwear and a t-shirt walking around her room. Even from this distance, I could tell she didn’t go to the gym that often but she wasn’t exactly obese either. Then the boyfriend/husband made an appearance. He sauntered out from what I believed to be the bathroom… completely naked. There was no hiding the fact his body wasn’t exactly a work of art either. He was kinda chubby but not obese just like his female companion. Now both of them were now at their window, looking over at my direction. I turned my head slightly because I wasn’t sure if they were looking at me. After a minute, I turned my head back and by now, he’d pressed his face right up against the window. It was clear he wasn’t looking at me but looking at a window in my hotel, the side perpendicular to my room. There he was pointing and gesturing at some unknown sight, all the while showing me and the rest of the world his naked body (including his penis if you weren’t sure).

I didn’t think I could take much more of this so I went back inside and turned on some HBO while I waited for Ron to arrive. After a few minutes the knock on my door signaled Ron’s presence. We watched TV for a few more minutes when I mentioned to him the chubby naked guy I saw out on my lanai. Ron wanted to see so I said ok and we both went out there.

As I turned to the right to point to the window where I had seen naked dude, I immediately saw that he was no longer at his window. He was in fact, having very, very visible sex with his female companion on the bed. It was an all out show. The sun had set hours ago, so it was completely dark outside. Their drapes were completely open and almost all the lights were on in their room. There was no mistaking they wanted everyone within viewing distance to know they were having sex.

The couple at one point just suddenly turned off all the lights in their room, which signaled to us the end of the show. We were disappointed, yet we had pictures! Ron and I then went to have a few drinks at some bars. Nothing else that night topped what we saw earlier.

Ok, so you’re probably wondering what Ron did with the pictures he took. Of course he sent them to me. I have them. I have also uploaded them to my server. I am also willing to share them with you. Before you get all click-y and download-y, keep in mind a few things. The pictures are blurry and have bad lighting so don’t expect studio quality shots. Also, while there is no clear genitalia visible in any of these shots, there’s no mistaking there’s two people having sex in the photos, so viewing these at work probably isn’t a good idea. Did you read that correctly? Don’t look at these at work! So with that out of the way I guess you can see what we saw.

Well, have fun with those.

9 thoughts on “THE SHOW OUT ON THE LANAI”