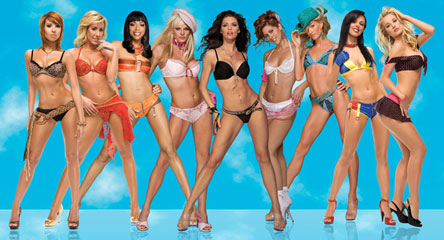 The Ooh La La show from the previous night opened up our eyes in terms of what type of entertainment there was in Vegas. Thoughts of seeing Wayne Newton or Celine Dion evaporated quite quickly and we looked to see what other shows were on.

Some how, we settled on a production called Fantasy at the Luxor Hotel and Casino. Though the official web site can be found here, it does have some annoying music that plays. Turn your speakers down or press stop on the control before it starts playing. The Luxor web site also has a Fantasy page which is actually a bit more well laid out but it too has annoying music.

Fantasy is quite different than Ooh La La. First, the show is in an actual auditorium with stadium style, assigned seating and a capacity that is much larger than what we had at Ooh La La. As such, the experience can be less intimate, though if you’re a dude in the first two rows or so, you might disagree with that statement after the show is over.

The venue is also the same stage where comedian Carrot Top performs his show. As a quick aside, I must mention that Carrot Top was my favourite prop comic in the 1990s when he regularly appeared on national late night TV talk shows. Then he got all weird a few years ago by deeply indulging in body building and plastic surgery. Some even claim he used body enhancing drugs to help him build muscle. By doing so, people started talking about his appearance rather than his comedy, which was first and foremost strength. A shame really.

Fantasy has some fairly high production values. The show is choreographed by a fellow named Cris Judd. If that name rings a bell, he was briefly married to Jennifer Lopez at the turn of the century. The show itself revolves around the lovely dancers (of course), a female singer Stephanie, and a male singer/comedian/impressionist named Sean. Stephanie and Sean are kinda the hosts for the show as they are the only ones on stage who speak. Sean actually has a few solo acts where he’s the only one on stage singing in character as Michael Jackson, Sammy Davis Jr., and Tina Turner among others. He’s is very talented.

All the acts in the show are quite slick. The combination of music, lights, smoke, and dancing is impressive. As opposed to Ooh La La where there was a bit of tease involved, the Fantasy girls get right to the point about showing the audience exactly how beautiful they are all over. I think my favourite dance routine with the ladies had to be the one where they were all wearing tear-away business pant suits with matching fedoras and ties. Oh man, I think I’ve worked downtown too long.

There is also a bit of audience participation involved. Stephanie picks one dude from the audience pretty early and taunts him unmercifully for the rest of the show. If Stephanie ever picks you and asks you who your favourite girl is so far, you better answer “Stehpanie”. At one point, the un/lucky dude winds up on stage dressed as Elvis between two of the topless dancers, complete with a guitar. For posterity sake, a Polaroid picture is taken and a Fantasy calendar awarded to the hapless participant. The embarassment is not done there as Sean then takes over and begins a five minute routine where he implies the dude will take the calendar back to the hotel and use it as a pleasure aid.

Overall, the show is a well-oiled machine. The dancers are absolutely gorgeous and talented though there was no antics suspended from the ceiling. I also liked the hosts Stephanie and Sean who break up the monotony of seeing bare breasts for entire hour plus of the show.

Just like the night before, all of us had some how came away with a favourite dancer. Mine was Dar, who had a dazzling smile and a healthy body. Adam liked Sean the best.

If you’re interested in seeing more, there are some YouTube videos about the show. One of them features a sorta behind the scenes look at the production. The other, um, shows footage from the making of the 2007 Fantasy calendar. Though it doesn’t actually contain nudity, it probably isn’t a good idea to watch that one at work. Having said that, here’s the link. Look for Dar in the french maid outfit. Ooh la la!

Sadly, that was the last show we saw in Vegas for this time around. Maybe next time we’ll do the Wayne Newton thing.