I just drank some juice from a glass.

So this evening, I’m gaming on my Wii (yes, I’ve finally started using my Wii again) when I heard this loud bang outside the window. Not a split-second later, the lights flicker but they don’t go out. I look on the screen and yes, I’m still in Nazi-occupied northern France.

Upon further inspection of my home however, reveals that some lights have indeed gone out. It turns out that anything that isn’t powered via an electrical socket, for example fixture lighting, isn’t receiving anything juice. A quick check of the breakers reveals none have been tripped.

So while I’m able to get my ass kicked in 32 person multiplayer on the Wii, I have to pee in the dark in the bathroom. I’ve never seen something like this before. The next weird thing I noticed was the electric stove. These things use a special plug, so it wasn’t a surprise to the stove’s electric clock was off. When I tried to turn on one of the elements though, it lit up and actually got hot. I tried heating up a can of soup but I noticed something was wrong. Even though I had it cranked up to max, it wasn’t getting very hot. It took about twice as long to heat my soup up compared to normal. So it would appear the stove isn’t getting enough juice.

I wonder what’s going on?

The video quality isn’t the best but the above video shows the full segment from the “Best Individual Sports Game” part of the VGAs. No one told Big to call out the president of Neversoft but it sure was funny. 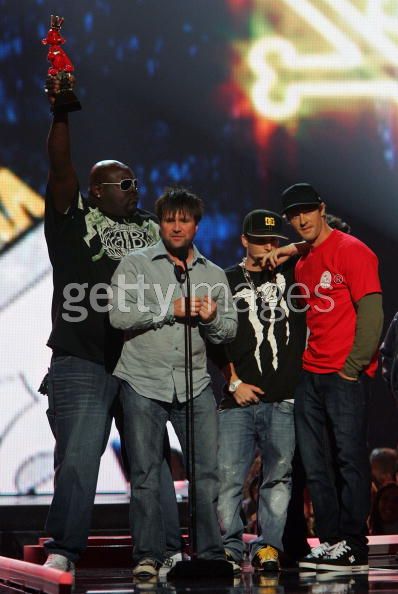 Are you familiar with the Spike TV Video Game Awards? Yeah, do not feel bad if you are not. Spike TV has been running this awards show since about 2003. It’s garnered its fair share of criticism, for being mostly a party for celebrities to attend and for nominating games that had no real business being nominated.

Despite some real rough patches, I think they’re trying to turn things around. If you look at this year’s list of nominees, there are some actual decent selections. Humbly enough, skate. has been honoured with a nomination in the “Best Individual Sports Game” category. We are up against Tiger Woods PGA Tour 08, Virtua Tennis 3, and a game called Tony Hawk’s Proving Ground.

I’ve been told that in that particular category, a TH game has won every year since its inception. This years show will air on Sunday night but it will actually be taped on this Friday night in Las Vegas. Our executive producer Scott will be down in Vegas as the dev team representative.

As another sign that the show is turning more legit, we actually don’t know who the winner will be. As such, the fact that Tony Hawk himself will be attending makes it even more interesting.

Despite a bit of cheesiness and way too much focus on the celebrities, companies actually get to send part of the dev team to the show. It’s actually someone who worked on the game who gets to make an acceptance speech. So, for every ten minutes the camera is on Carmen Electra, please pay attention to the 30 seconds or so a dev team member gets to thank his or her fans and family for supporting their game.

Yeah, I know these aren’t the Oscars or the Emmys but I’m genuinely excited about our nomination. This is probably how some dude over at Weta Digital felt when Return of the King got Oscar nominated for special effects, knowing full well that he wrote the software for “random Orc attack patterns”.

So, if you’re interested, tune into Spike TV this Sunday at 9pm. If anything, you’ll enjoy host Samuel L. Jackson. Wish us luck but remember to send said luck before the taping on Friday night.

Based on my reliable sources, there was only a single Ph.D defense today on this planet and it was my good friend Rhonda who successfully defended her thesis.

Though I wasn’t at the defense, according to the media that was present, things went smoothly and the nearly three hour examination ended in what was widely reported as a “three-minute standing ovation”.

Ok, I may have made up some of the previous sentence but it is indeed true that the defense went well and it is just a series of formalities before I can officially start calling Rhonda Dr. Rhonda from now on. Congratulations go out to her and everyone who’s supported her through out these years.

I’ve known Rhonda for half a decade now and she’s been working on this Ph.D for that long, plus three months, so it’s been years filled with hard work and dedication. I really commend anyone who has the fortitude to complete a doctoral degree.

Anyways, congrats to Rhonda again, you’ve made your parents and myself so very proud.

Up until today, I’d never taken two straight days off work before. In any case, I am feeling much better now and I think I’ll be able to make it to work tomorrow.

Faithful readers, I am currently battling the flu. Not half an hour after writing my previous post, I was set upon by chills and full body aches. You know the aches I’m talking about, where every part of your body reminds you that yes, they contain pain receptors. Even the process of moving a hair on my head triggered pain signals in the follicle.

Heading to bed, I shivered for about an hour under the covers before somehow, I fell asleep. Awaking around 7am, I instantly knew that there would no code written at work today. My head hurt like a sonvabitch, I was fatigued, and I generally felt awful.

Falling back to sleep, I again awoke, this time at 10am to send out a message to work that I would not be in today. Strangely, while feeling completely like crap, my appetite was still there. Eating breakfast though, was a sad experience. While hungry, I sat at my breakfast nook with a blank look on my face, staring at the wall, devoid of any energy. I slept for most of the rest of the day.

For about an hour, I felt somewhat better which might have been the Tylenol kicking in, otherwise, it’s been all chills, fatigue, and aches.

EA had earlier offered free flu shots for employees and I’m kinda kicking myself for not taking them up on their offer. It’s not that I’m afraid of needles but mass flu shots is one of the scenarios for the start of the zombie plague.

Ok, I think I need to go back to bed.

EA has started a new project and I’m excited to be part of the new team. We had a team meeting last week and from what I was shown, the new game has strong potential to be a real crowd pleaser. I can’t give out any details yet but in due time, there will be news.

Anyways, the point of this post is that we still need people to make this game happen! We’re in need of software engineers, artists, and project managers. Take a look below at the positions available. RTF means “regular full time” and TFT means “temporary full time” but keep in mind a lot of TFTs become RFTs after they’ve proven themselves after a single project. If I refer you for a position and you get hired, I get some cash! I’ll be willing to share it with you!

So if you want to work on a kick-ass project, them e-mail me!