I’m about to eat a blueberry muffin. 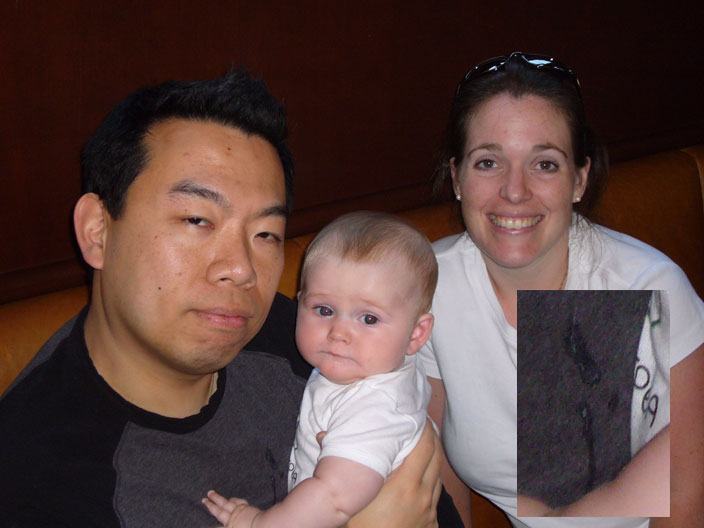 In a previous post I mentioned how my good friends Nic and Marcia came back to Vancouver for a visit. They brought with them their first child, Nyah who I had the pleasure of meeting. During lunch, Nyah spit up some of Marcia’s breast milk onto my shirt. I finally have a photo of the blessed event. Despite the little accident, Nyah is a delightful little baby.

There have been a ton of people who have poured many hours of work into the game I’ve been working on. Sometimes when I’m at work late, I ask myself, “Outside EA, does anyone really care that I’m expending all this effort into making this a better game?”

For some developers, they’ll never know the answer to that question because there’s no way for the general public to provide their thoughts on an unreleased game. Lucky for us, there’s the EA forums, which has been a way for the public to tell us what they think. A few days ago, we had to announce that there was going to be a small delay in releasing the demo on Xbox 360. It was originally going to be out on the 15th of this month but it will be later now.

There was a lot of hectic activity on the forum after we made that announcement. A lot of people were disappointed. In amongst those posts, however, was one user who tried to put it all in perspective:

“Scotty B’s the man. everyone dont get mad at the devs for this mishap its not there fault. once you get the game i can assure you all it was worth the wait. All of you guys that have worked on this game are GODS to me cause i actually take skateboarding seriously and you guys have made it possible to play an acutuall [sic] real skate game which i have been waiting for all of my life. i can wait for this demo as long as it takes and no one should be complaining. Ide [sic] like to see you make a game as epic as this ones gonna be.

Thanks to all of you at Blackbox you have basically made my dreams come true with this game. Once i get this game (which i have already paid for) i will cry in the car until i get home because i will be soo exited.

thanks again you all are gods.”

So there you have it. At least one guy out there appreciates our hard work. He even called us gods. That’s a nice touch. Also, I’m glad he’s excited about the game but I hope he won’t really cry in the car on the way home.

Despite working roughly 12 hours a day for who knows how long it’s been, I do manage to sneak away for some social time once in a while. Today was such an occurrence when I went out to dinner with my friend Kate who has just returned from a whirlwind tour of the world. This was my first time seeing Kate since just before she left for Australia.

We chose to go to Steamworks for dinner since it was close by, even though I think Steamworks is completely overrated and is actually a pretty mediocre eatery. Anyways, we were able to find a table downstairs near the window that afforded us a view of water. Our waiter turned out to be a gentleman who I shall call “Tory” in this post.

Now I knew we were instantly in for a unique waitering experience as soon as I saw Tory. Tory sported a very well-groomed pornstache that would make most men in the 70s jealous. He had grown it to a perfect length, not too long to have it look like a handlebar but long enough to evoke that “bow-chicka-wow-wow” feeling.

Tory, while polite, also had a bit of cheekiness that I could not help but respect from a food service point of view. When Kate asked him if it was possible to get a whole wheat bun for her veggie burger, Tory instantly responded with:

He smiled when he said it, so it kinda made it ok. Plus, I couldn’t help but stare at his pornstache.

Overall, Kate and I had a great time at dinner. In the end, we rated Tory’s service as overall good with a few points deducted for screwing up Kate’s order slightly. We did, however, add points for the pornstache.

Gwilli, otherwise known as Greg, is leaving his current job and taking a new one that’s closer to his home. This new move means he won’t be able to lunch with Garrett and I anymore. To celebrate his new job, he took us to Costco and then the Tinseltown food court. I’ve never really had high praise for that food court. Sadly, I was right again. The highlight of the lunch was seeing Greg get a 1 Tb drive. That’s enough to fit every Zamfir CD that’s been released.

Read all about here.

I almost forgot the milestone but today is my one year anniversary as a software engineer at EA. It’s been an interesting and difficult year, not difficult bad, just a lot of work. A lot has transpired in the last twelve months.

If you know me, you know I’m fond of reflecting on past times and this case will be no different. I almost didn’t take the EA offer because I didn’t think I was “good enough” to be at EA. The decision was really difficult at the time since I didn’t want to screw up what I had already.

Well, one year later and I have absolutely no doubts or regrets about my decision. I also know now I am certainly good enough to be an EA SE. Having said that, I realize I am far from the best SE at EA and there’s a lot for me to learn still. It’s this combination of being comfortable in my abilities while realizing I can improve that puts me in a position that I like.

What a mistake it would have been to have not taken the offer. My goal in grad school was to work on a big triple-A title on next-gen consoles. skate certainly fits that description. It’s a privilege being part of the team that’s making skate. I’ve seen so many new things that EA does that I would have missed out on at a smaller company. Just the fact that people are even talking about our game in appreciable numbers on the Internet is a real treat.

Of course, it hasn’t been all party hats and gold coins. I’ve worked a lot of OT and I’ve essentially given my life to this game for about half a year. It’s a lot to ask for out of people and I hope the higher-ups at EA realize this. Actually, I do know some managers realize this, they’ve told me. I know they’ll try to make it up to us. The only question is, what will they offer us?

So, it’s year one done and I don’t know how many more in the future. It was a good decision and I can’t wait to get skate out the door.

What you will need:

1. Sift flour and baking powder together in a small bowl.
2. Cream butter, add sugar slowly, mixing well.
3. Mix in egg and lemon rind.
4. Add flour/baking powder mixture, mix in well.
5. Shape into balls about the size of a golf ball, place on pan, flatten slightly with the bottom of a glass.
6. Bake at 300° for 15 to 20 minutes, just until a bit golden on the edges.
7. These last well if kept in a tightly covered container, and actually taste even better after a day or two as the flavors develop.

Um, I’ve never tried this recipe. I wrote it down on a cocktail napkin a few months ago when I was at the Cecil. Let me know how it turns out.

It’s a long weekend in BC and thus I’ve given the staff at et.com a much deserved day off on Monday. We’ll return tomorrow with a new recipe for shortbread cookies!

I rarely post twice in one night but I’m gonna make an exception in this case. Today was the finals for the Mega Ramp competition at the 13th X Games. Since our game is going to feature the Mega Ramp, a lot of us were watching the competition live via web cast.

Australian Jake Brown pulled off an amazing 720 spin and was just one landing away from taking the gold when he lost control of his board. It is estimated he fell from 45 to 50 feet in the air, straight onto the ramp surface. There were exclaimations of disbelief from all around the studio. I thought he was probably seriously injured at the very least.

The video above shows the incident. The objects you see flying off his body at the end are his shoes. Think about that for a moment. He hit the ground so hard, the force tore his shoes off his feet. Incredibly, the X Games staff deemed it unnecessary to stabilize his neck or back and allowed him to walk off to the sidelines. Brown was sent to the hospital to get checked out but there is no word on his condition.