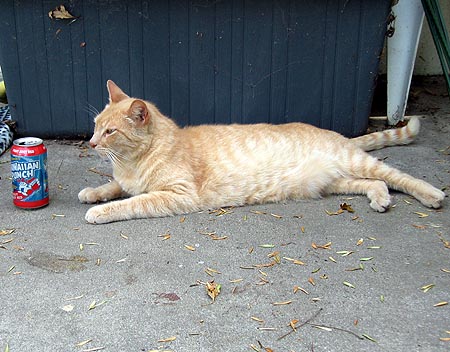 Please allow me to share with you an interesting site I found a few weeks ago. It is simply entitled What Jeff Killed. According to the owners of the site, Jeff is an orange cat who lives in California. Jeff is not a house cat. He lives in the wild. The site owners supposedly supply Jeff with some food and water but do not own Jeff nor let him inside their home. All their interactions with Jeff happen in or around their back patio.

For some reason, Jeff kills animals of varying sizes and brings them to the patio for the home owners to see. The people who run the site thought it would be neat to document and photograph each of the kills.

Judging by the size of Jeff’s kills, he is an efficient and probably vicious hunter. Looking at his pictures though, he seems nothing but a lazy, docile house cat. I personally found the site fascinating. Somewhat like a wildlife show, it shows the seemingly cruel ways in which animals hunt each other.

Yes, some of the pictures will make some people squeamish but I guarantee you you’ve seen worse if you grew up anywhere near a farm. The site does get hate mail but please, Jeff is gonna kill those animals whether or not anyone takes photos of the kill. There’s nothing glamourous or sensational about those photos.