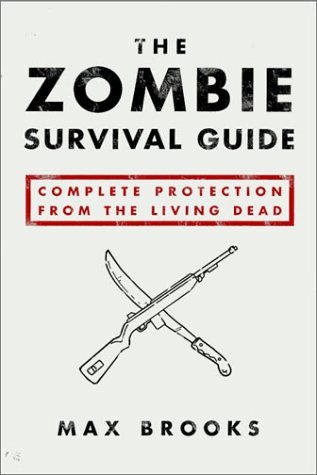 I went looking for a book today. As you can probably tell, the title in question was The Zombie Survival Guide. Written by Max Brooks, the son of parents Mel Brooks and Anne Bankcroft, the book is a serious take on surviving zombie outbreaks. Perhaps because it was written in a deadpan manner, the book has been commonly catergorized in the humour section of many bookstores. Despite this, many fans of the zombie genre have appreciated the serious tone that Brooks adopts in his material.

The book was released in 2003 and went on to sell rather well for such an odd subject. I’m ashamed that I only decided to pick up the title now, especially since I was made aware of its existence over a year. A search of two local bookstores yielded nothing. A Chapters did have one in stock but it was being held for another fellow zombie survivalist. A subsequent Internet search revealed one copy exists at both the downtown and Granville/Broadway Chapters. I will continue my search once the work week begins anew.

What also excites me is the impending release of Brooks’ new book, World War Z. Following the same serious tone, this new piece is written as a series of first-hand accounts of survivors who are battling zombies during a world wide zombie apocalypse. In the book, the world has been subjected to a Class Four outbreak, the most dangerous class. Brooks himself invented the classification in his first book. In such a scenario, zombies are at the cusp of becoming the dominant species on the planet. Exciting stuff indeed!

The movie rights to World War Z were recently up for frenzied bidding, with Brad Pitt’s production company, Plan B winning the sweepstakes. World War Z arrives on bookshelves on September 12, 2006. In the meantime, I’m going to try to get my hands on the survival guide. Be sure to check out the book’s web site!