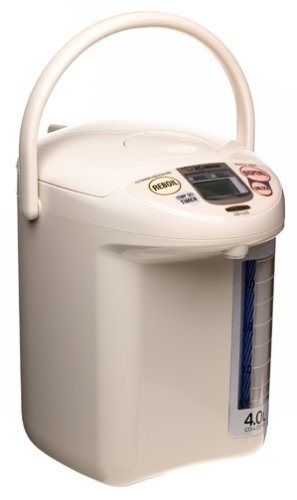 In a post I made almost three years ago, I mentioned how much I enjoy drinking plain hot water. Some of you have witnessed this first hand.

When you need as much hot water during the day as I do, it’s not practical to use traditional kettles to prepare the water. Once the water boils, it will cool down to an unacceptable temperature for restoring your vitality. Sure, you could re-boil it throughout the day, but what a pain in the ass.

Since drinking hot water has been so far been mainly an Asian culture thing, Asian appliance makers have developed solutions which meet the demands of hot water drinkers. The appliance you see above is a typical hot water dispenser. It’s designed to provide a large source of hot water throughout the day. Once the water reaches a boil, it can be set to keep the water at varying levels of temperature. The water will always be hot and available at an instant.

Some earlier models dispensed water through a manual pump mechanism where you had to push a large button to get your water. Some of you might remember the model I had at SJC worked on that principle. Newer models have an electric pump that dispenses the water for you. All that is required is a simple push of a button.

Safety is built into these devices. Sensors can detect low water conditions and will turn off the heating elements when the reservoir is dry. It’s also impossible to dispense the water by accident. A separate button must be engaged to unlock the pump before you press a different button to dispense the water.

The convenience of such products cannot be beat. Boiling water for things like pasta and noodles is available immediately. Tea or coffee can be made as quickly as you can say, “Tea, Earl Grey hot.” In the morning, no time is lost to waiting for water to boil.

If you’d like to know more, check out this model from Amazon.com. Or in general, try searching for “dispensing pot” on their site.

And that’s where babies come from.

So I had an interesting Saturday evening. It started off when I went to dinner with my friend Chris. Both of us started as testers at EA about the same time. I left to go to grad school but he stayed on and now he’s a test manager. Chris and his wife now live in Port Coquitlam, so we’ve been meaning to go out for dinner for a while now.

Debbie didn’t join us because she was having a girls night over at their house. That left Chris and I to go to the Earl’s in Port Coquitlam. I had the chicken curry with naan bread and it was awesome. Anyways, near the tail end of dinner, a table of about fifteen people arrive and get seated about twenty feet behind us. The group looked like they were all in their early 20s. I also noticed some sketchy looking guys in the group. One buff guy was strutting around in a white jogging suit, talking on his cell phone and chatting up the waitresses. Keep this guy in mind for later.

A few minutes after that group was seated, there was a loud disturbance coming from their table. There was also some yelling. Half the restaurant on our side seemed to stop what they were doing to look over. By the time, I looked behind me, I didn’t see what the commotion was all about. Little did I know whatever it was, the restaurant staff was concerned enough that they called the RCMP.

Not long after, a huge RCMP officer strides into the restaurant and goes directly to the big table behind me. He was all business and went right to the end of the table to the jogging suit guy.

“You, you’re under arrest. Get up and turn around.”

The jogging suit guy looked surprised but he got up anyways and faced the officer.

The tension was palpable at this point. Jogging suit guy paused for a second and then turned around and placed his hands behind him. The officer then cuffed him and said something into his radio. Not ten seconds afterwards, two more large RCMP officers strode into the restaurant and stood next to their colleague. The first officer motioned to the end of the table.

The first officer then hustled the jogging suit guy away from the table and out of the restaurant. The two remaining officers walked over to this tall, skinny guy who was sitting next to the first guy. Skinny guy couldn’t believe what was going on. The two officers each grabbed an arm and began moving him away. He started to resist, so the two officers had to forcefully get him back in line. They stopped him briefly and warned him not to resist again or he’d be very sorry. He got the message and he was also led out of the restaurant.

This was all very entertaining for the staff and the customers of the restaurants. Through the window, I could see more police cruisers pull up with their lights on. Eventually, they all drove off, presumably with the offenders in the backseats. The remaining people in the table behind us left about ten minutes after the RCMP left. I don’t think they were there even 30 minutes.

The rest of our dinner proceeded without incident. After I drove home, I thought that’d probably be the only police interaction I’d have for the evening. I was wrong.

After watching SNL, I was playing video games until shortly before 2am. After getting mowed down by the same MG42 emplacement three times in a row, I decided I probably needed a break to rethink my strategy. I got up to get a drink when I heard this loud knocking on my front door. Who could that be? No one knows where I live.

I cautiously made my way downstairs to the front door. I fumbled with the light switches to get the exterior light to turn on. When I did turn it on, I opened the blinds on the front door and peered out. I saw two Port Moody police officers standing outside the door. I opened the door.

“We got a call that there was some trouble here?”

“Um, no. I’m all alone and I didn’t make any call. I’ve been playing video games for the last hour or so.”

I gave him my address to confirm that they had gotten the right place.

“Yeah, that’s what we got on the report. May we come in and look around?”

Well, there was no way I could say no to these cops, so I let them in. They both stepped into the foyer area and closed the door. One of them radioed in to confirm the address. We all waited for dispatch to respond. I was now painfully aware I was wearing mismatched PJ tops and bottoms. My top was also open, revealing my super comfortable but equally ratty sleep shirt. It was torn in several places at the collar and there was a mysterious stain on the front. Damn, I thought.

Finally through his earpiece, I could hear the dispatcher replying to the officer. A slight smile appeared on his face and he turned to me.

“My apologies, we’re one street over where we’re supposed to be. I’m sorry.”

They turned to open the door and they were gone. One street over? How the hell do you screw that up? I’m theorizing that they actually got the street right but got the number wrong. I live in a townhouse/apartment complex that has two buildings. Each building is almost an exact mirror of the other. I bet they got the wrong building and really were supposed to be on the parallel universe on the other side.

After returning to my computer, I noticed the front flap on my PJ bottoms had been undone the entire time and I’m pretty sure one of the officers could see my underwear the entire time he was talking to me. Damn.

Natalie Portman hosted an above-average SNL last night. The opening monologue, as shown above, was pretty good. There were references to Star Wars and The Professional. Oh Chris Parnell, you so funny.

Since we moved offices, it’s been an interesting adventure trying to find affordable and good places to have lunch. Earlier in the week, one co-worker mentioned some place he happened upon. It was this sushi restaurant that served cheap breakfast all day.

It was just crazy enough for Tim, Dave, and I to go looking for this place today. The name of the restaurant is Yummy Sushi and it’s located on the corner of Pine and W. 3rd. When we got there, it was clear that it was a no-frills type of operation. There was enough space for maybe 10-12 people in there. The decor was minimal and it really reminded me of a small-town diner.

Despite the name of the place, we were there for breakfast. For $2.80, you had a choice between five pieces of bacon, five sausage links, or a slice of ham, plus hashbrowns, two eggs (any style), and two pieces of toast. Let me repeat that price again. $2.80!!!one!!!111!!

I went for the sausage links, Tim got the bacon, and Dave got the ham. After we ordered we were all very nervous about the quality our meals. When our food arrived it turned out that our fears were unfounded. All our eggs were pretty good, the toast was great, and I enjoyed my hashbrowns. The bacon was real tasty and the sausage was good, in fact I thought five links was too much. The only minor comment Dave had to make was that his ham might have been Spam-infused. Otherwise, it was all very decent for $2.80.

Everyone also ordered a bottle of juice, so the total for each person came out to $4.60. I can’t remember the last time $4.60 bought that much food at a restaurant. Last but not least, when we got the bill, we even got mints. $2.80 breakfast!

We left a $20 for all our meals, tipping nearly the same amount as the breakfast. It’s not a place I’d go everyday but certainly an awesome deal when the fancy strikes.

Tonight, my family went out for Japanese food for my sister’s birthday. I knew that green tea contains caffeine so I tried to drink very small amounts of it. I guess I still drank too much. I am wide awake right now. Here’s a list of how much caffeine is in some common drinks.

I’d like to use this forum to wish my lovely sister a happy birthday. You’re the best little sister a brother could ever ask for.