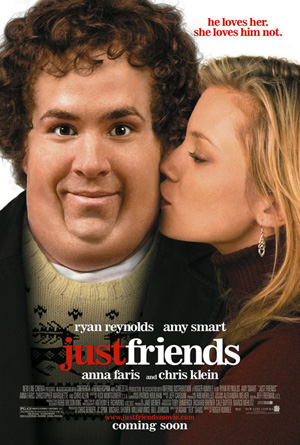 Well, they finally made a movie about being stuck in the “friend zone”. It stars Ryan Reynolds and Amy Smart. The movie makes its debut on November 23.

What is the “friend zone”? If you’re like 99.9% of guys out there you won’t need an explanation. For those still clueless (ie. most women), I’ll leave the explanation to a quote from the title character in the movie:

“The ‘friend zone’ is like the penalty box of dating, only you
can never get out. Once a girl decides you’re her ‘friend,’, it’s
game over. You’ve become a complete nonsexual entity in
her eyes, like her brother, or a lamp.”

Amen to that brother. No guy ever sees himself heading towards the “friend zone”. It always takes a guy by surprise. Typically, what happens is that a guy starts off great with a particular girl. They seem to get along, they do stuff together, hang out, and in general, the girl appears to enjoy the poor sap’s company. Then, at a critical moment, when things could turn romantic, she pulls the dreaded “let’s be friends” speech outta no where. There are several variations on the speech but it has been known to include terms like, “love you like a brother” and “I hope we can stay friends forever”.

It’s at this very precise nanosecond that the guy realizes where he is. He is in the “friend zone”. No guy is ever just over the border either. Any guy in this situation is about a bazillion miles in and he checked in penis at customs, he just didn’t realize it until now.

At this point, there’s very little a guy can do. One option is to completely go with it and say things like, “Yeah! I love being friends with you too! Yay!” The guy then stays friends with the girl. Now invariably, if this happens, the girl will find a boyfriend in less than two weeks. It’s also guaranteed said girl will start discussing her new beau with the “friend”. She’ll start saying things like how big her new guy’s penis is, you know stuff the “friend” is just dying to hear. For the “friend”, it’s a lot like taking a tiny bit of poison each time they talk.

The other option requires a bigger set of cojones but this happens a lot less. This involves the guy telling the girl he’s not interested in being just friends and that he thinks they might have a great relationship together. Almost assuredly, the girl will have a differing opinion at which point the dude should walk. The hike outta of the “friend zone” at this point is suprisingly short and they’ll have his penis ready for pick-up as soon as he gets to the border. I will admit, I have never heard of any guy doing it this way before.

Being in the “friend zone” is an oft discussed subject among guys and the existence of such a place is lamented. I don’t want to toot my own horn, but it was me who coined the following phrase:

“I’ve been in the ‘friend zone’ so many times, I own property there because it’s cheaper than renting…”

There will never be a solution to the problem of being in the “friend zone”. People will invent flying cars and wrinkeless linen before that happens. On the other hand, the problem does ensure the video game industry will be thriving for eons to come. Guys figure if they can’t have a girlfriend, they might as well play video games.

I must also add a disclaimer, I am not advocating that guys should not have female friends. On the contrary, I think every guy should have at least one platonic female friend to get an insight into how women think and behave. Guys who have such a friend are better off than guys without.

Well, let’s get back to the movie I was talking about. It has a pretty good web site. You can view the trailer and see the profiles for all the main characters. There’s even a kick-ass ecard that girls can use to send out their “friends”. Now the guy can get the bad news in the comfort of his own home. Also, in a blur of marketing and blogging the title character in the movie has his own blog. In it, he has tips for recognizing and avoiding the “friend zone”.

I’m pretty sure I’ll go see this movie when it comes out, if only for once, I’d like to see another guy take it up the pooper.