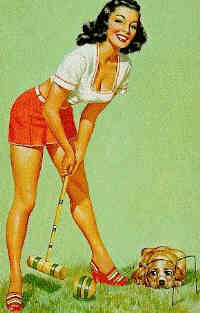 I played croquet for the first time this year and the first time in months. The weather was just nice enough to play today. After a brief rain delay, the sun came out to shine down upon Bryan, Adam, and myself.

Most of the croquet connoisseurs of SJC have now moved out. Other than Adam, I’m not sure who else plays croquet. We got some interesting looks from some of the residents that moved in during September. Kathleen opened her window and yelled out, “Look at the boys playing their crochet!” We just smiled and nodded.

I was hoping that the rust of the winter would reign in my skilled croquet opponents but this was not the case. Both Adam and Bryan were in fine form. I played a suprisingly conservative game, leaving my go-big-or-go-home strategy for later in the season. In an indication of the level of skill I had to contend with, the boys made the first post just a hair under 15 minutes.

It was not my day to be champion unfortunately. Both my opponents became poison while I still had four wickets to go. I turned in a valiant effort after that, including a sequence where I survived four straight shots at my ball when I lost a turn going through a wicket the wrong way. In the end, the challenge was greater than my early season form and Adam took me out.

Adam won the whole thing in a gutsy move, declining to call a suicide shot and instead, hitting Bryan’s ball which was just inches away from the edge of the grass.

I look forward to more games in warmer weather on well-manicured lawn of SJC.