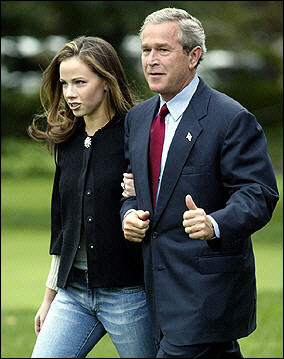 Nearly two months ago, I wrote in a post that I was projecting George W. Bush would win re-election as President of the United States of America. At the time, my only theory on why that was going to happen was that the average American voter has completely lost all common sense and the ability to use logic. I now have further proof.

Last week, a study released by the University of Maryland’s Program on International Policy Attitudes revealed some eye-opening figures. Let’s go over some of the more important findings. Of those respondents who declared themselves Bush supporters, 75% of that group believed that Iraq either had WMD or had a full-fledged program for developing WMD. This despite the findings of the Duelfer report which found otherwise. To make matters even worse, 57% of Bush supporters though the Duelfer report concluded the exact opposite and in fact supported their erroneous beliefs. In stark contrast, only 26% of Kerry supporters believed Iraq had any WMD or a program to produce them.

If that doesn’t make you want to beat up stupid people, the report also found that 75% of Bush supporters believe that Iraq was providing major support to al Qaeda. Furthermore, 60% of Bush zealots believe that most experts have also concluded that there is a tie between al Qaeda and Iraq. Again, even though the findings of the independent 9/11 Commission (which are public) have found otherwise, Bush supporters somehow find a way to believe whatever they want (or what they are told). In contrast, only 30% of Kerry supporters believe a link exists, though 30% is still alarmingly high.

In terms of world view, 57% of Bush lapdogs believe the world population wants Dubya back for another term. The truth is actually very much different, with recent polls suggesting that if the entire world had a vote, Kerry would win twice as many votes (something which even the Electoral College couldn’t save Bush… but just barely).

There are many, many more numbers that will make you really sad. I recommend you go read the findings yourself.