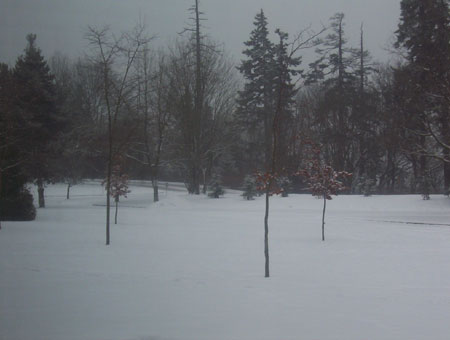 I’ve never been at UBC when there has been so much snow. When I woke up this morning, I was hoping that classes would be cancelled. At 8:30am, things were still normal on campus. That meant I had to go to my Animation Physics class. Boy, will that class be a doozy. The prof talked about particle systems today. He showed a few clips from the second Harry Potter movie that featured Dobby the House Elf. In one scene, Dobby snaps his fingers and disappears in cloud of dust. The prof told us we’d be able to do that by next week… well, not disappear in a cloud of dust, but be able to make a cloud of dust in computer graphics. He then went on to discuss the mathematics behind such a cloud. The concepts came fast and furious. If I had taken this class after my second-year I’d be just dandy, as it stands, it’s been almost ten years. I’ll have to work my ass off for this class.

After class, I went back home and had some lunch. My next class was at 12:30pm, so I decided to take a nap. When I woke up, I received several e-mails that classes had been cancelled for the rest of the day. The word had come down around 11:45am. Not trusting good fortune, I decided to show up at my 12:30pm class. As predicted, the prof did show up and we did have class. Damn it!

When it ended, I made my way to the Village to deposit some cheques. On the way there, I passed by the bus loop. I have never seen so many people wait for the buses as I did today. The lines were so long, that people were standing on the roadway. I didn’t see a single bus in the loop and that is a rare occurrence during a weekday afternoon. I sure felt glad that I lived on campus.

On the way back from the Village I saw three buses leaving the loop. Each bus was packed beyond total capacity. People were standing in the stairwell where you get on the bus. Normally, the drivers don’t even let you stand in front of that yellow line let alone in the stairwell. With all the coats, snow, slush, and moisture, it must have been gross in those buses.

Well, I think there might be a snowball-fight related event at the courtyard later, so I’m going to prepare for that.