THIS CRAP IS HARD

The end of the school is approaching faster than US tanks towards the Iraqi border and I’m going crazy with the amount of work I have to do.

Last term I took a grad course in Human Computer Interaction which basically taught me how to design GUI (graphical user interfaces). For the project, my team of four had one guy doing the programming and the rest of us did the design and documentation.

This term, one of my courses has me and another guy designing a GUI for an e-mail client (we also have to make the client work). This time around, we’re both doing the programming and designing. I spent an hour trying to whip a Mail Composition window in Java. Take a look at the results below. 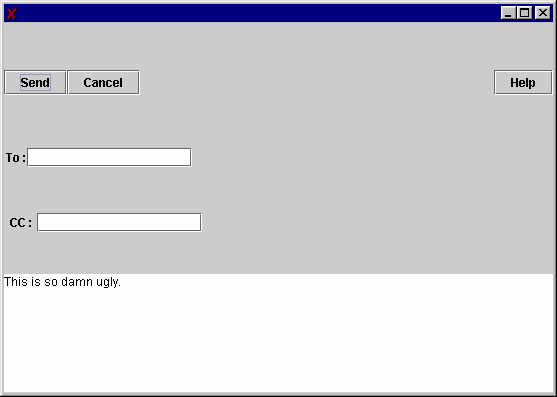 Robert Blake am I in a lot of trouble! Disregarding none of the buttons work for a moment, the window looks awful right now. If you re-size the window, the buttons move position relative to the sizing. Apparently, Java doesn’t do kerneling so that’s why the CC field doesn’t line up with the To field. Maybe I’ll have to make it “Cc” instead.

We have three other windows to design and code. On top of that, we have to make everything work. I forsee troubled times ahead.