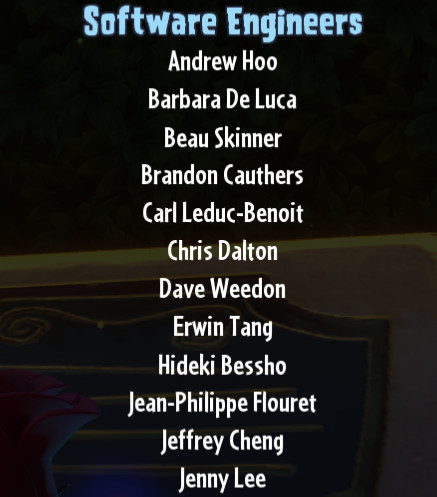 As a thank you for working on Plants vs. Zombies: Garden Warfare 2, I got a free copy of the game which I played at home for the first time today. It always weird playing a game that you worked on at home for the first time, at least for me. Part of me understands that I’m seeing a video game, which is supposed to elicit feelings of fun and enjoyment. At the same time, a large part of me just sees all the massive amount of effort from hundreds of people that went into making this game. Do I just see a refreshing and original take on the third-person multiplayer shooter genre? No, I can’t but help see the time it took me almost two weeks to fix a single bug around the holidays.

Don’t get me wrong, I’m extremely proud of the game and our combined effort to get this game made but it will take a while before I can just enjoy the game without thinking about work. Also, don’t be fooled by the screenshot above, there were many names in the software engineers list that I had to cut out. The list of people who worked on this game was massive, as is usual these days.