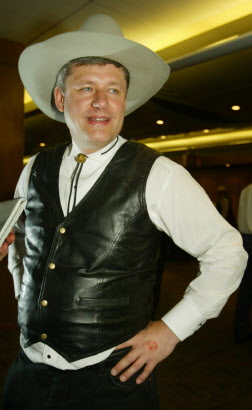 There are about two months to go until Canadians vote in the next federal election. Two months is a long time and lots can happen in the various campaigns before the ballots are cast. I’ll let ya in on a little secret though, I know who’s going to win the election. Despite it being the worst outcome, this fall, Stephen Harper and his merry band of Conservatives will blunder their way back into power. I can hear some of you protesting already, as you mention the various polls that have Harper’s party trailing the NDP. In fact, there was a poll released today that had the Conservative slip to third place. It’s all hogwash to me. I don’t trust polls any more than I would trust Stephen Harper.

Polls are misleading and their samples sizes are frequently way too small to be of consequence. The only poll I would trust is if the pollster was able to get data from about 20 million registered voters across the country. That won’t happen so my distrust of polls stays. Here’s another example of why polls don’t mean jack squat. Let me take you back to the B.C. provincial election of 2013. I think we can all agree that during that campaign there was considerable talk from many voters of how terrible Christy Clark’s Liberals had run the province. There was a lot of negative energy about her and it seemed people really wanted to turf her. Hell, nearly every single poll prior to the election had her party on the losing end. Yet, what happened in the end? Her and her stupid morons in the Liberal party soundly defeated the NDP. How did the polls get it so wrong?

So if I don’t trust the polls, why does that mean Harper will win the election? Isn’t it just as likely Mulcair or Trudeau will win? No, and that’s easy to answer. Individually, Canadians are capable of being logical and relatively intelligent. Taken as a whole though, I think Canadians are absolute idiots. As you put more of them together, the collective intelligence goes down and the Harper votes go up. Out of the nearly four hundred friends I have on Facebook, I can think of only one person whom I could guess might vote Conservative. Every time I go online and read the comments about a political story, the most popular comments are those bad-mouthing Harper and the Conservatives. Even in the cesspool that are Internet comments, Harper seems to have no support. So who the hell is voting Conservative and going to win the election for Harper? In short, it’s idiots and old people.

It’s the idiots who will whine about jobs and support for the “little guy” but then toss their vote to a Conservative party that caters to the rich and corporations. It’s this unfathomable disconnect that I’ve yet to reconcile, this ability to work against yourself, essentially giving the government to the ok to screw them. I guess you can’t fix dumb sometimes. Then there are the old people. Old people who have become fearful, afraid of just about anything in the world; afraid of taxes, change, technology, young people, terrorism, and death. These are the easiest people for Harper’s goons to get votes from. All Harper needs is a few commercials where Stevie insinuates that ISIS is about to cross the bridge at Windsor and it’s a done deal. I often wonder if one day when I’m old and ornery, will I suddenly turn into a frightened bastard, so scared of the world that I’d throw my vote away for some right-wing fascists who promise me they’re the only thing keeping Islam from overrunning the Tim Hortons down the street. Will that happen? That’s a question for much later.

For now, remember you read it here first on the evening of October 19th, as you watch Stephen Harper give his victory speech from some hotel in Calgary. What has become of this great Dominion?