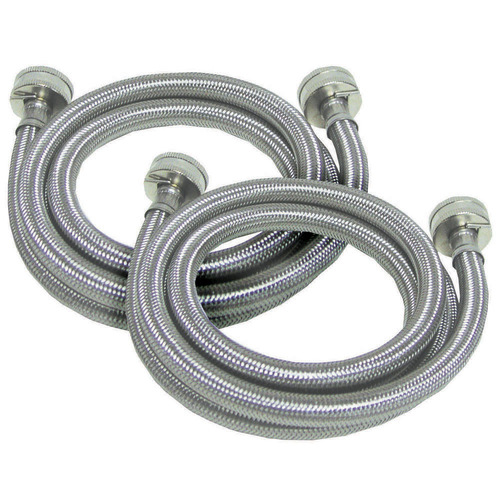 Do you have a washing machine in your home? If so, this post will be most likely very relevant to you. Last week, I attended the AGM of the strata council for my building as I wrote in a previous post. There was nothing too exciting in this year’s meeting except that council strongly suggested every owner replace their washing machine hoses at their earliest convenience. My building is now around five years old and the developer used rubber hoses when they first installed all the washing machines. I have now learned that rubber hoses used with washing machines are prone to breakage after the five-year mark. At such time, the rubber become brittle and can burst at any time. The owners were told of an incident in the building where a rubber hose broke and water flooded the unit and several units below them. Costly repairs had to be made, insurance had to be involved, and it was pain in the ass for everyone involved.

Strata council has suggested that owners replace the rubber hoses with braided stainless steel ones, which are much less prone to breakage. I openly question why the developer, the Degelder Group, didn’t just use stainless steel hoses in the first place. Actually, I can probably answer that myself. The stainless steel hoses cost just a tiny bit more than the rubber ones but I can tell you, if there’s a corner to be cut or a penny to be saved, Degelder will do so without hesitation. I like my apartment and I don’t regret buying it but I can assure you Degelder tried to build this whole place doing it as cheap as it could.

So anyways, I’ve been told that replacing the hoses will cost about $150 or so. I know that it can be done by yourself but I don’t take any chances when it comes to plumbing. I’d rather get ripped off slightly but know I won’t have flooded my own home because I wanted to save a few bucks. This is where I suggest you look to replace the hoses in your own home as well. If they’re made of rubber and you’ve had them for more than five years, don’t delay in getting this looked at. In the meantime, you can allay your fears by turning off the water supply to the washing machine between uses. This practice is actually recommended by most washing machine manufacturers but hardly anyone does it. There should be two valves, one for hot and one for cold, which you turn off. If you’re going to be away from your home for any length of time, you should do this no matter what type of hoses you have.

Out of all the stupid advice I’ve doled out on this blog, consider this one of the most important ones!