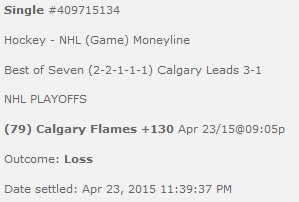 As per my previous post, I inferred that the Vancouver Canucks were fragile and mentally weak, and thus ripe for elimination in their Thursday night game against Calgary. All the signs pointed towards that, as their last two games were a disaster. So this afternoon, I ponied up $200 and bet that Calgary would win. I’m not sure what happened but a very different Vancouver team showed up and were all business tonight, out shooting the Flames by a 2 to 1 margin. They were rewarded by a 2-1 victory, staving off elimination and sending the series back to Calgary on Saturday.