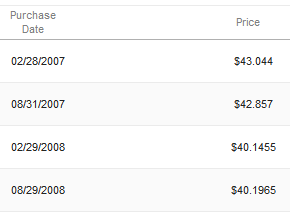 When I worked at EA, I participated in the employee stock purchase plan, which is a common way for employees to purchase stock in their company, at a discount. At EA, deductions were made from your pay to fund the purchases, which were made twice a year. It is interesting to note that you were only guaranteed to make a profit from these stock purchases if you sold them immediately. Because the stock price could fluctuate in any direction after you bought them, you ran the risk of being in a money losing situation as soon as the day after. For example, say you bought X number of shares at a discounted price of $10 a share, the market price could have been say $11. If you sold immediately, you’d be guaranteed a profit of $1 per share. If you held onto the shares however, things could get better or they could get worse. What if the shares fell to $5 a share next week and you had held onto your ESPP shares? You’d be out of luck then.

I got caught on the wrong end of the stock market with four separate ESPP opportunities. I bought the shares and held onto them instead of going for the sure thing. The image you see above shows you the four times I bought ESPP shares and didn’t pull the trigger right away. The stock tumbled below $40 a share after the recession hit in 2008. After August of 2008, EA’s stock price has not seen the $40s since. So for more than 6 six years, I’ve sat on these shares, hoping I’d be able to dig myself out again. I swore that I didn’t even want to make a profit on these shares anymore. If I could just break even on these four sets of shares, I’d be happy. Could that happen soon?

The chart you see above is an instant and up to date snapshot of the stock price for EA for the last three months. As you can tell, it’s come close to $40 but it’s fallen short. The 52 week high was $38.64 as of this writing. I need it to go above $40 obviously to offset the $20 commission that will be charged when I sell. For the two sets of shares, it doesn’t need to go too far over $40. The other two sets will need a bit more help.

It’s almost there but I’m afraid that it will retreat back into the lower $30s or worse. I could sell them for a loss to get some capital losses to offset capital gains but I don’t have any other stock to sell! I just have to be patient. It’s been six years now, hopefully it will be only a few more months to go.