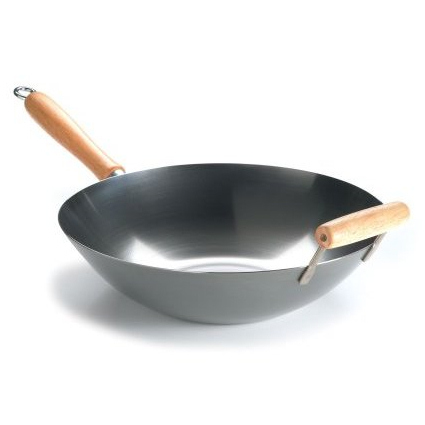 Perhaps it was the fatigue or the case of the Mondays but sometime this evening I decided that I am going to buy a wok over the holiday break. Over the summer, I quite enjoyed my culinary explorations but they were decidedly Western dishes. I love Chinese cuisine as well so I think it’s time I looked into making those foods as well.

Of course, having a wok isn’t necessary to make Chinese food. You can make a lot of stuff without a wok but the wok is an iconic part of Chinese cooking. I think buying one is a great first step for making authentic Chinese food.

Selecting the right wok is critical. I have a ceramic stove top so that will limit me to a flat-bottomed wok. Ideally, all wok cooking should be done over a gas flame because you need the very high temperatures that only a gas range can supply. This is called wok hei, which I wrote about a few years ago. In a perfect world, I’d be cooking my round bottom wok over a blue flame but I have to use what I got. I am definitely not buying a non-stick wok. I’ll be going the traditional route and buying a steel wok. This will necessitate a proper seasoning of the wok but that’s part of the charm of cooking with a wok. I’ve seen woks that retail for several hundred dollars but some go for less than $60. I’m probably going to get something that lies in between those amounts.

So what will I be cooking? I’m really interested in making stir-fried noodles and vegetables. There are so many recipes to choose from. My ultimate goal is to try to make lobster in the wok. I’m looking forward to expanding my horizons (but hopefully not my waistline).