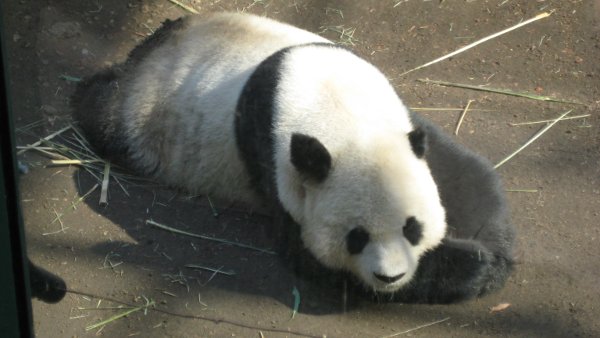 I went to the world-famous San Diego Zoo today. It was the most impressive zoo that I’ve ever seen, though admittedly, I don’t frequent zoos that often.

The first thing I had to see were the pandas. Pandas are such rare animals that you’d be hard pressed to see them in the wild and only a handful of zoos worldwide can host them. Those reasons made them a must-see today. Though it was almost midday by the time I got to the pandas, there was surprisingly very few people at the exhibit. There was no lineup and no waiting, I basically walked up to a railing and stood just a few feet away from one of the most interesting creatures on the planet.

There were two pandas out and about today. One was in a tree, being lazy. This panda was a mom, who has had several cubs in captivity. The second panda was in another area. This panda was one of the mom’s sons. He was also being lazy and lying on the ground.

I watched them for a few precious minutes and then moved on. These animals, while on display, are not here to entertain us in the sense of a show. Pandas, like many animals, do just lie around in the sun for hours a day. The zoo wants them to act as if they are in their natural habitat.

For some of the other animals, I felt kinda sorry for them. I wished they were not enclosed and the freedom to move where ever they wanted. The pandas on the other hand, I think they need some external help at this point. It’s perhaps a good thing that humans are helping them breed.

Last but not least, a bottle of water is $4 at the zoo.