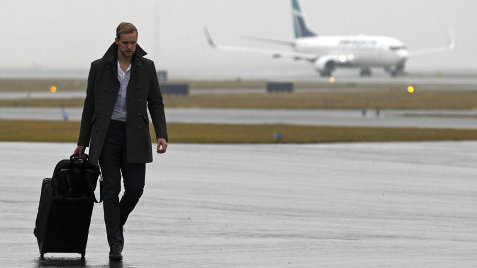 The top picture is of Cody Hodgson of the Vancouver Canucks. He is in his first full season of professional hockey in the NHL. The second picture of is Alex Edler, also of the Vancouver Canucks and veteran of several NHL seasons. Earlier in the season, Hodgson’s team mates noticed he was dressing like he was still in “ninth grade”. One of the more experience players, Manny Malhotra actually dragged Hodgson to a mall in Columbus, Ohio to get him grownup clothes befitting a professional hockey player.

He supposedly has more stylish clothes now but in the photo that was taken just this week, I’m not digging the shade of blue he’s wearing. I applaud him for wearing a suit I don’t think he should have gone with a polo shirt of that colour. I would have preferred an actual dress shirt with buttons. As a contrast, Edler looks very sharp and classy in his outfit. Of course, the most important thing is how these guys play on the ice and in that regard, Hodgson is doing awesome this year. He even scored a goal tonight in Montreal. I suppose I will cut him some slack but no more shirts in that shade of blue!

2 thoughts on “KEEP AT IT CODY”