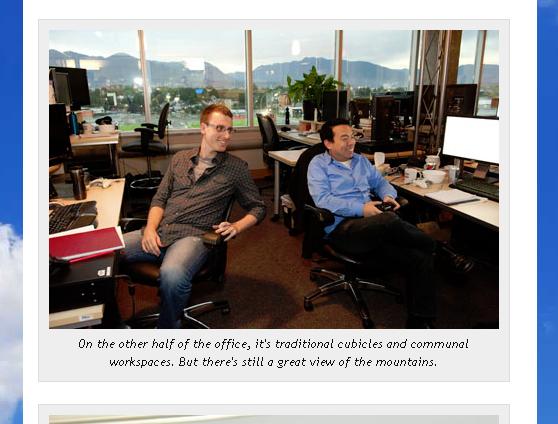 In a previous post, I detailed how a camera crew from G4TV visited Radical Entertainment where I work. During the same visit, Activision Social Media Manager, Dan Amrich and his wife Katrin were also at Radical. I didn’t know it at the time but Amrich was going to write a blog post about his visit. They were given a tour of the studio by Ken, the studio head at Radical. I knew they were coming close to our area so Matt, one of the lead programmers, and I wondered what we should be doing when they came by. Matt said we should do the popular “let’s have two people looking at the same monitor as we both point towards something on the screen while looking fascinated” routine but it seemed cliched.

When everyone finally came around, both Matt and I actually stopped working. Ken asked us a few questions about what we were working on. After we replied, a picture was taken and that’s what you see above. Unfortunately, that picture is not representative of how we go about making games. First, we do not make games by using a PS3 controller as I am holding in my hand in the picture. Despite what this commercial implies, actual game making involves, at least for me, pounding away at the keyboard until the compiler finally recognizes everything I’ve written. Second, most of the time, I do not have a rather goofy smile on my face as I’m working. In fact, in this stage of the project, I’m more likely to have a furrowed brow as I wonder why something isn’t working or why someone dumped a bug that has nothing to do with me in my bin. Lastly, though it appears I’m pointing out to Matt how tight my graphics are, we don’t usually point out what we’ve finished to another person. I suppose if it’s something really, really cool we do but we’re at the bug fixing stage, so we’re just trying to get as many issues corrected as possible. I also want to point out that I’m slouching horribly in that picture which is probably why I had terribly tight back muscles for that entire week. Sit up straight people!