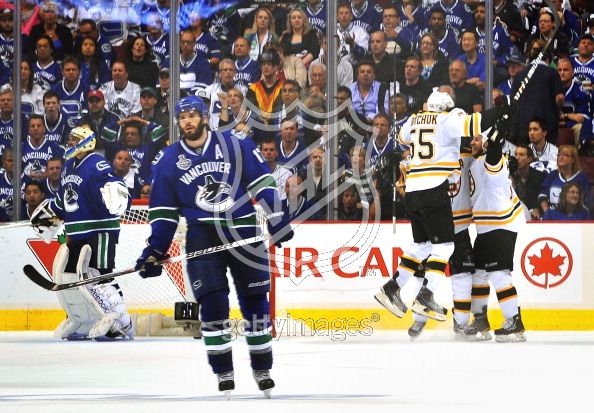 Tonight, as I had feared, the Boston Bruins defeated the Vancouver Canucks in game seven of the 2011 Stanley Cup Final. The Bruins win their first championship since 1972. Though the Canucks played ferociously for the first fourteen minutes of game seven, they still managed to surrender the first goal. Ultimately, they could not solve the Bruins’ defense and more importantly, they had no answer for the brilliant Conn Smythe winner Tim Thomas. He was unstoppable. Simply put, the Canucks could not score enough goals to win. For Vancouver, the loss marked a sad, bitter, and disappointing end to a season that held so much promise. Chosen by many at the beginning of the season to be the frontrunners for the Cup, they ultimately failed in their goal in spectacular fashion. There is no joy in having now witnessed three Vancouver Canucks teams go to the Final and seeing all three return empty-handed. The manner in which the 2011 edition of the team lost will be remembered for years to come. It’s clear the why and how Vancouver lost can be attributed to several things.

Though full credit goes to Boston for the series win, it could be easily argued that the 2011 Vancouver Canucks found a way to lose the Stanley Cup. To use a cliched term, the Canucks “snapped defeat from the jaws of victory”. They came roaring out of the gate in the series, establishing a 2-0 lead. Historically, teams that had won the first two games of the Final finished with a record of 42-4, a telling stat that showed Vancouver was headed in the right direction. As with many Vancouver teams though, the Canucks managed to find a way to lose, even in the face of victory. The team failed to put up even a single decent road game. Just one good performance in Boston would have secured them their first Stanley Cup. Instead, they were horrible away from Vancouver. The Canucks were timid and played like they were afraid to lose or in other words, they didn’t play like champions. They had their best chance in game six, when all the pressure was on Boston in a must-win situation. Instead, they squandered their chance and had nothing close to a killer instinct. Game seven offered them another chance and again, they could not convert.

So where did they go wrong? One cannot begin to discuss the shortcomings and failures of the 2011 Vancouver Canucks without mentioning “superstar” goaltender Roberto Luongo. He was merely average tonight and nowhere near as good as Thomas. On a night that he could have stood on his head to steal a game for his team, he once again failed to do that. In previous games, he was apt to let in early and soft goals. When the team relied on him most to give them a lift, he let the wind out of their sails and single-handedly drained the momentum from his teammates. Luongo was wildly inconsistent during the playoffs. His grand and embarrassing failure to keep it together during three games in Boston was a huge reason why the Canucks still are without a championship. He had three chances to redeem himself while away for Rogers Arena and each time he let himself, his teammates, and all of British Columbia down. His exceedingly average performance tonight was just another stain on what is now a tarnished career. Though he gets paid superstar dollars and he believes himself to be a superstar, it’s quite clear that Roberto Luongo will never ever reach the legendary stratosphere of goalies where the likes of Patrick Roy, Martin Brodeur, and Ken Dryden belong. Luongo does not deserve all of the blame for the misfortunes of the Canucks but he shoulders a considerable amount of it.

So who else was accountable for this failure? Look no further than to the offensive stars of the team, namely the Sedin twins. Daniel and Henrik were back to back Art Ross Trophy winners, scoring more points in the season than any other player. In the regular season, it appeared they could tally assists and goals at will. They seemed to be magicians with the puck, dealing out pretty plays that confused defenders. They dominated between October and March. In the playoffs, they became ineffective and wilted. Teams found a way to stifle them. The Sedins were nearly invisible against the Bruins. At first, I was hoping for a bounty of Sedin points. In the end, I was just relieved if no goals were scored against Vancouver while their line was on the ice. For the Sedins, the biggest knock against them was that they were not playoff performers, that they simply disappeared when the games mattered the most. The playoffs of 2011 did absolutely nothing to change that perception. The Sedins will continue to be hounded by those labels and wear them like shackles. Can they ever be depended on in the playoffs?

While the Sedins could not score, the other lines on the Canucks could not compensate for the loss in offensive firepower. In the earlier rounds, the second and especially the third lines were able to cover up for the Sedins. Players like Jannik Hansen, Raffi Torres, Chris Higgins, and Maxim Lapierre were able to chip in unlikely goals here and there. This was enough to get them past the weaker teams. These players were not expected to be offensive superstars so the fact they were stopped against Boston shouldn’t lead to much criticism on their part.

Last but certainly not least, we must mention the impact of injuries. Every single year, the NHL playoffs bear witness to injuries to key players that their teams cannot hope to survive without them. It was my biggest fear from day one that a critical Canuck would be felled by an injury and that the championship would slip away. It’s clear now that injuries were another major part of why the Canucks lost. Consider Mikael Samuelsson, the 2nd line winger. He could not continue beyond the Nashville series and was in and out of surgery before even the San Jose series was over. Samuelsson is the only Canuck on the current roster to have won a Cup. Who knows what might have happened had his goal scoring talent been added to the mix. Then consider Manny Malhotra. Struck in the eye in mid-March, the fact that Malhotra was even a part of the Final was inspirational. I wonder though, how much less effective he was because of the injury. What if the Canucks had a Malhotra that had not been hit with the puck? Would he have been better in faceoffs? Would that have led to fewer offensive chances for the opposition? At one point, I considered Malhotra’s injury to be the one that would be most costly. I now know this was wrong. The loss of Dan Hamhuis on defense clearly had the most impact on the Vancouver Canucks. Signed last summer by GM Mike Gillis, Hamhuis was coveted for his ability to shut down the opposition’s star forwards. He was a rock on the blueline, making smart plays and repelling the opposition’s top lines. Hamhuis made Kevin Bieksa better. Hamhuis silently made things easier for the Canucks and he was key part of why things went relatively smooth after the Chicago series. Without Hamhuis, the opposition became harder to handle and Bieksa seemed at times lost without his partner. What I would give to somehow go back in time and tell Hamhuis not to hip check Lucic in game one. Of all the missing players, I wonder the most what the outcome would be if Dan Hamhuis had been back on the blueline. Last but not least, let us discuss the walking wounded. In the next few days, we will find out the extent of the injuries of players who somehow played through the pain. I am most interested in the severity of Ryan Kesler’s ailment. In the first round, I was disappointed that no one player had stepped up his game to become one of those playoff warriors who understood what needed to be done to win. Kesler answered my call in the second round. While the Sedin twins floundered, Kesler took it upon himself to single-handedly win the Nashville series. Scoring the majority of the Canucks’ points in those six games, he elevated his game to levels that only true playoff warriors would understand. Then in game five of the San Jose series, he somehow injured his leg. Missing only a few shifts, he managed to hobble his way onto the ice and scored the tying goal to send the game into overtime. Kesler was silent against Boston and I am guessing it wasn’t because of a lack of will. It would not surprise me if he had played the last seven games on essentially one leg. If Kesler had been completely healthy, what kind of performance would he had given?

4 thoughts on “A CRUEL END”