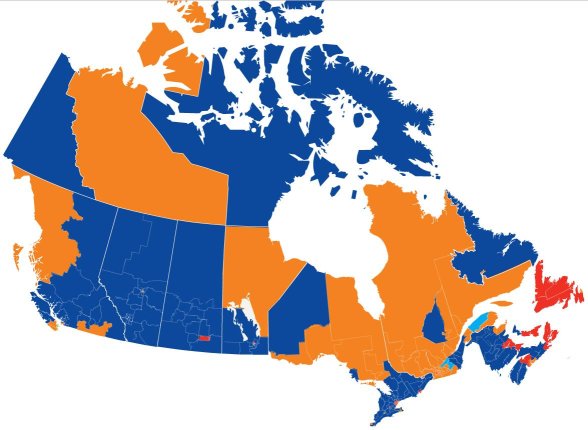 What you are seeing above is a map of the Canadian federal election results for 2011. The blue represents the Conservatives, the orange the NDP, the red the Liberals, the light blue the Bloc Quebecois, and though you don’t see it one tiny bit of green for the Green party. My greatest fear for election day was a Conservative majority for Stephen Harper and that became a stark, sobering reality within the first minute that polls closed on the west coast. You can read the rest of the results here. I could have hoped that Harper got a tenuous majority but that didn’t even happen as he is 25 seats over the mark. What’s the chances of 25 Conservative MPs switching to the opposition? Oh well.

I’ve written it before and I’ll write it again, I know very little about politics but here’s my quick take on the election results. The whole thing went very wrong in southern Ontario. Traditionally, that region could be depended upon to be a Liberal stronghold or at least an area where the Conservatives had a very difficult time making in roads. This time around, southern Ontario for the most part abandoned the Liberals. Unfortunately, they chose to flee to the Conservatives in droves. This gave Stephen Harper the bump he needed to win a majority. I still have no idea what the people of Ontario were thinking. I can only guess that it was the older voters who fell for Harper’s fear-mongering of a “scary” NDP government. Old people can be counted upon to do two things, vote and be scared of everything. Why do you think they’re the only ones who buy robot insurance? I had mistakenly believed that Ontario would have voted more for the NDP, splitting the province between them and the Conservatives. I was wrong about that.

You might be wondering if I would put any blame out in western Canada. No, there’s no way I could honestly do that. Western Canada has been a Conservative stronghold for well over a decade. I didn’t expect any help from the west so there were no expectations there. Though every election, I’m still dismayed at my home province of BC being so blue.

If there could be small, tiny bright note in all of this, I do want to applaud the people of Quebec. They completely abandoned the Block Quebecois, the party whose main purpose was to separate Quebec from the country of Canada. The voters of Quebec wanted a change and they knew the Bloc wasn’t viable any more and Harper wasn’t the solution either, so they bravely voted for the NDP. For them to go from the Bloc to the NDP was a stunning indication of their openness but their boldness was sadly not rewarded.

I also must comment on the sad state of affairs of the once popular Liberal party. They got hit bad, losing about half their seats. They now have four long years to rebuild the party and they are going to need to put in a lot of work. First and foremost, I am really not sure if Michael Ignatieff is going to survive as the party leader. It’s pretty clear that Canadians did not hear his message and he did not resonate with the voters. I now realize what a superstar Jean Cretien was compared to Ignatieff. The question is, who will emerge as an actual effective leader of the party? The name Justin Trudeau has already been mentioned many times tonight. The son of Canada’s most colourful Prime Minister indeed was re-elected tonight but is he still too young to lead the Liberals?

So what does the future hold? I do not know. My fears are the Conservatives now have free reign to change Canada to how they see fit. Lower taxes for corporations? Less spending on health and social programs? Billions in cost overruns for F-35 jets? Restrictions on social freedoms? I don’t want to fear the worst but I feel like I need to prepare for it just in case. The funny thing is, I saw an interview tonight with an NDP party official. He was just absolutely thrilled with his party’s showing. The interviewer asked him what the NDP planned on doing as the new Opposition. He kept on saying the NDP would keep the Conservatives honest and fight for the Canadian people. The interviewer then asked him how the NDP was going to do with a Conservative majority. He had no answer.