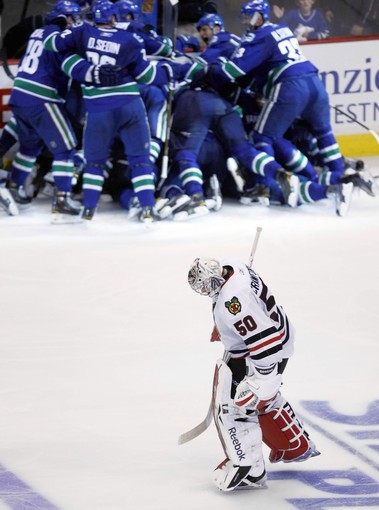 I have to give the Vancouver Canucks credit, they somehow found a way to win tonight. They did, however, also find dozens of ways to flirt with disaster all throughout the evening. Though the Canucks dominated the latter stages of the game, Chicago Blackhawks goaltender Corey Crawford was unbelievable in net. He single-handedly kept the Hawks in the game. The more chances the Canucks got and the longer they they went without capitalizing on those chances, the more worried I got. In ice hockey, not taking advantage of your chances while dominating usually means the other team will eventually turn it the other way and get a goal going against the flow of play. Chicago did exactly that. They used the brilliant goaltending of Crawford to weather the withering Canucks’ attack and then in a opportunistic play, they tied it up.

If I was worried in regulation time, I was doubly so in overtime. Anytime a game goes into OT, it’s essentially a dice roll. A stupid harmless play can turn into a series ending goal. So despite the domination that the Canucks had in regulation, I knew that OT meant either team could win it just easily as the other. Then the Canucks took a penalty in overtime. It easily could have ended there as well. They some how managed to kill off the penalty and even Bobby Lou managed to make a decent save off Sharp.

So how did the Canucks win it exactly? For starters, some of the Canucks came to play with the intensity that a game seven demanded. In particular, Kesler and Burrows raised the level of their game to do the things that were necessary to win. I was especially impressed with Kesler’s effort. The defensemen were also very good tonight. They stood up opponents in the neutral zone and on the blueline. They took away time and space from the Hawks. As a team they also blocked shots and cleared rebounds. This leads to the next key point in the victory. The forwards and defensemen were good enough in their own end so that they didn’t need Roberto Luongo to be anything but average overall. They just needed him to not let in a soft goal and he delivered on that. So despite walking a very thin line at times, they were able to capitalize on a huge error on the part of Chicago and now escape into the second round.

Now this may come as a surprise to some fans here in Vancouver but they actually didn’t award the Stanley Cup to the Canucks tonight. The Canucks will now face Nashville in round two. There are several items that have me slightly worried as the Preds roll into town. First, Nashville has now had two more days of rest than Vancouver. The Canucks will be coming off a huge emotional high, so the risk of coming down from that high and not being able to focus again is a real concern. Second, I can guarantee you some of the Canucks are banged up and walking wounded. Hell, Sami Salo is outright injured. It’s unclear how much gas some of the Canucks used up in the first round. How their epic battle with Chicago will affect their game going forward is to be seen. Last but certainly not least, you have to wonder if some of the leaders on the Canucks team are going to show up against Nashville. Luongo’s troubles in games four and five are well-documented now. Will he suffer another meltdown in the next round or will he have settled down now? It’s a huge question mark on the horizon. Then there is the situation with the Sedins. The two highest scoring players in the league in the last two years had exactly two points between them in the last four games of the series. Let me say that again. After playing games four, five, six, and seven, the brothers had just two points. For players who are supposed to be the top offensive threat on the team and also leaders for the rest of the players, coming up dry in the most critical games of the series is unacceptable. For years, the criticism against the twins was that they were good regular season players but they could not perform in the playoffs. Is such criticism warranted now?

The second round will probably start either Friday or Saturday. The Predators will be another tough test. They have an excellent defensive core led by Shea Weber. Their goaltender, Pekka Rinne has given the Preds a chance all season. For now, the Canucks can rejoice in the fact they avoided a disaster by the narrowest of margins.

One thought on “CRISIS BARELY AVOIDED”