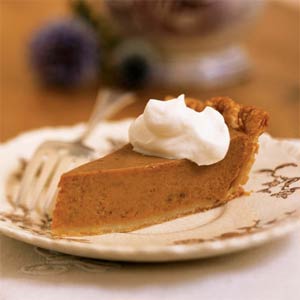 I know we’re well past Halloween and Thanksgiving but I just wanted to write about a gastronomical adventure I had with a pumpkin pie. It was sometime in late October and I was working some OT on a weekend. The catered dinner that evening was less than impressive. The main course appeared to be some sorta boiled pork chop mess. No one was a big fan.

For dessert though, there was a large silver platter of reasonably sized slices of pumpkin pie. Next to that was a bowl of freshly made whipped cream. Now it is my recollection that I’ve had pumpkin pie maybe a handful of times in my experience, perhaps less than five. Each time, I came away with the impression that pumpkin pie just wasn’t for me.

Despite my reservations and because I hadn’t eaten much of the boiled pork, I decided to sample a small slice of the pumpkin pie, along with a dollop of the whipped cream. After returning to my desk, I had the first bite of pie and cream. The resulting taste was a pleasant surprise, the complete opposite to say, a random punch to my testicles. The taste and texture of the pie filling was unlike anything I sampled before. It was just perfect. The crust they used was also great, not too crumbly but not too oily either. The topper, so to speak, was the whipped cream. It had been somehow infused with cinnamon, possibly at the molecular level, making each bite the highlight of dinner.

Before the end of the evening, my final tally was three slices, with each one bigger than the previous. I have not had pumpkin pie since, partly because I’m not sure where to buy it not but also because I have high standards now for pies of the pumpkin variety.