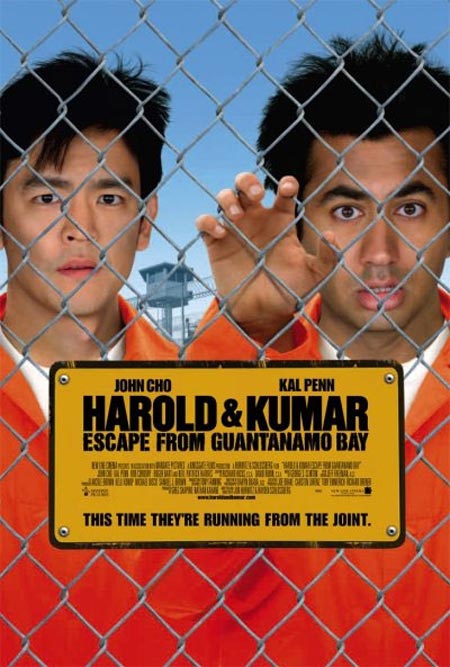 Despite being released on April 25, I only saw Harold and Kumar Escape from Guantanamo Bay this past weekend. I saw the first film in its theatrical run four years ago. It was surprisingly funny and had a clever social subtext to it. I have to thank Phil for driving us to the theatre that night.

Since the first movie came out, I’ve been a big supporter of the movie. Yes, it was funny and made me an even bigger NPH fan but that’s beside the point. Most importantly, it’s a rare example of a “traditional” Hollywood comedy where the two main leads weren’t two white or black dudes. The entire movie was wonderfully carried by an Asian and Indian actor. Unfortunately, there have been very few other movies like this since.

Ever since the sequel was announced, I’ve been very excited about the second movie. Somehow, Hollywood decided there was more money to be had in the Harold and Kumar universe. Have there really been two movies featuring an Asian and Indian actor that didn’t have to do with martial arts?

If I could get on my soapbox for a moment, I believe you’re Asian or Indian, you kinda owe it to the principle of cultural diversity to go see H&K 2. Not only will you be supporting a good cause, the movie is actually quite funny, features hot naked chicks, and we get another wonderful performance from NPH (“Everytime I see a bag of Hershey’s Kisses my balls get so wet“).

John Cho will appear next as Sulu in the next and highly anticipated Star Trek movie. Kal Penn is currently teaching two undergrad courses at the University of Pennsylvania, entitled “Images of Asian Americans in the Media” and “Contemporary American Teen Films.”

In the meantime, go see Harold and Kumar 2!!!