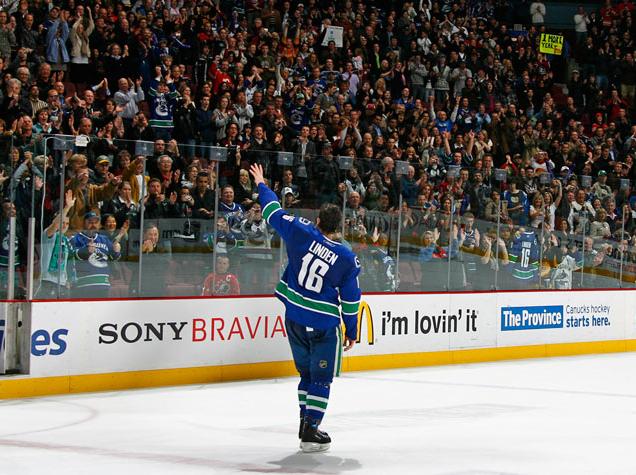 Though we’re still not sure of his playing status for next year, it was nonetheless a special night for Trevor Linden and his fans at GM Place on Saturday. My seats were fourth row, the closest I’ve ever been to ice level. I went to my first game in six years and made sure I arrived early to catch the warmup. I’ve said to many people that sometimes that warmup is the best part of going to a hockey game. It’s a great chance to see all the players closeup. If you’re interested, here’s some video from the warmup.

There were many people watching the Canucks warmup, probably more than I’ve ever seen. Also in great numbers were Linden #16 jerseys. They were worn everywhere, by people of varying ages, from children to senior citizens. The jerseys were also from different eras as well. Linden jerseys were represented from the yellow “V” days right on up to the current incarnation of the Canucks sweater.

I knew the evening was going to special when the crowd started cheering every single time Linden did anything or was on the Jumbotron (either live or in recorded video format). There was a huge ovation at the beginning when they announced his name as a starter at center. The sustained applause caused the announcer to have to wait several seconds before moving on to the next player in the lineup.

When the game started, the crowd was electrified whenever Linden touched the puck, hell they even got excited when he just went over the boards to take a shift. It appeared that the crowd wanted their collective will to get Linden a goal. He had several chances too. In a rare display of “bone tossing”, coach Alain Vigneault decided to give Linden a season high of over 18 minutes of ice-time. Linden was paired with Sedins for a while on the top line and he even played with Markus Naslund for a while.

Things really got going at the beginning of the third period. Linden began the period on the ice, ready to take the faceoff. His face appeared on the scoreboard above and the crowd began cheering again. It turned into a standing ovation. The officials refused to drop the puck and the players, on both sides, retreated from center ice to leave Linden to receive his loud ovation. Looking a little embarrassed, Linden raised his hands to acknowledge the crowd, making a full circle as to not leave out anyone. This only made the crowd cheer and applaud louder, which I did not think was possible. Again, here’s some video of the moment.

The game itself was a blowout, the Flames scoring seven goals to the Canucks’ one. Linden was on the ice, as he should have been, as the last few seconds ticked off the game clock. You won’t see many crowds cheering at the end of a 7-1 loss but this crowd didn’t really care about the score. Now most teams surround their goalie at the end of a game, but this time it was Linden who was the center of attention. After receiving greetings from his team mates, Linden noticed that the Flames were waiting for him at the other side of the ice. Led by Jarome Iginla, the Flames shook hands with Linden. After that, it was time for another circle around center ice for Linden who again graciously thanked the fans for their applause.

He then led his team off the ice, as he had done so many times in the past. There was a brief pause as the lights went down in the building as they prepared to announce the three stars of the game. The second and third stars went to the Flames, notably Iginla for the second, who received a loud cheer. The first star went to Linden of course, not for anything he did in this game, but for everything he’s done in a career that’s spanned two decades. A final first star for a player unlike the city has ever seen.

As Linden took the ice again, the crowd again got on their feet with a thunderous ovation. Slowly, Linden took a circle around the rink, again thanking the crowd for their undying support. Rarely do any players in the NHL have the special privilege of the last skate around the rink but here Linden was, lit by a single spotlight as he made his way around.

When he got to our corner, he was less than fifteen feet away from me and he appeared larger than life. He did a wave to us as he passed by. It was surreal seeing him that close and in that context. Linden didn’t linger on the ice, he did his lap and left. There’s an interesting moment that the cameras caught as he left. For a split second, you can almost see the moment he realizes this might be it, a career ending in adoration. If there one video you watch from this post, make it this one.

Linden and the team returned to the ice to give away their jerseys (as they do every year). It was generally agreed that whoever got Linden’s jersey this time around was easily the luckiest bastard in the building. In the end, some dude got his jersey and we called him a lucky bastard. After the jerseys were given away, the players came out to center ice, and thanked the crowd for their support. For the final time that night, Linden along with his team, left the ice to a loud ovation.

Linden has stated he hasn’t made any final decisions about retiring just yet. How far he is leaning either way is unknown. Whether or not he retires this summer, this was by far the most special sporting event I’ve ever attended. Outside of fried chicken, the best $129 I’ve ever spent on myself.