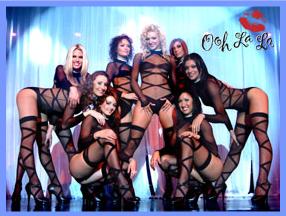 So when I was in Vegas last month, the boys and I wanted to see a couple of shows because Vegas is good for that kind of thing. Looking through our invaluable Frommer’s guide book, we had a few choices to choose from. We had musicals, magicians, comedy acts, Cirque du Soleil, and topless/nude revues. Though I argued hard that we should probably go see David Copperfield, we wound up getting tickets for a show called Ooh La La at the Paris.

The fun begins even while you’re lining up to get into the show. To help keep order and wrangle the line, the show employs some extremely attractive women in outfits that compliment their very fit bodies. You can never ever go wrong with schoolgirl and sailor outfits Adam told us.

The venue itself is quite small. I’ve read that it seats 300 but I thought it’d be at capacity at 100. Anyways, we were seated in the second row and I got the aisle seat which turned out to be a really good thing. Ooh La La features five talented ladies a night, rotating from a roster of eight dancers total. The show lasts just over an hour.

I have to admit, that was probably one of the shortest hours I’ve ever experienced in my entire life. After it was over, the boys and I decided it was pretty much the most awesome thing ever. Sure the girls are beautiful and yes, they get topless about a quarter the way through the show, but they are indeed extremely talented. Beyond their dancing talents, we saw some amazing displays of athleticism. One dancer was suspended in the air via a large hoop and cable. She did some crazy moves up there. Another dancer was also suspended in the air but she made use of silks just like you’ve seen in some Cirque du Soleil shows. That’s something you don’t see at the Cecil. Overall, from singing to magic to comedy to being in the air, these ladies were all very impressive.

Strangely enough, after the show ended, we discovered each of us had a favourite performer from the show. Mine was Kelly Adkins, who had a nice nouveau ballet number in the show. Perhaps it was that and the red hair that did it for me? Ms. Adkins is also featured prominently in the Fashionistas, another show in Vegas. In 2001, she was in a scene in Ocean’s Eleven where she was helping Brad Pitt’s character get a passcard from a lonely hotel employee. A screencap from her scene can be found here.

If you’re interested in more information about Ooh La La for your own trip to Vegas, please visit this work-safe link here which contains a work-safe video preview of the show and a three second interview with Ms. Kelly Adkins. If you still need more video footage of the show, there’s a 30 second clip on YouTube. It’s YouTube so I guess it’s pretty much work-safe.

If you’re ever in Vegas, think about Ooh La La!

2 thoughts on “WHAT WE SAW IN VEGAS PART ONE”