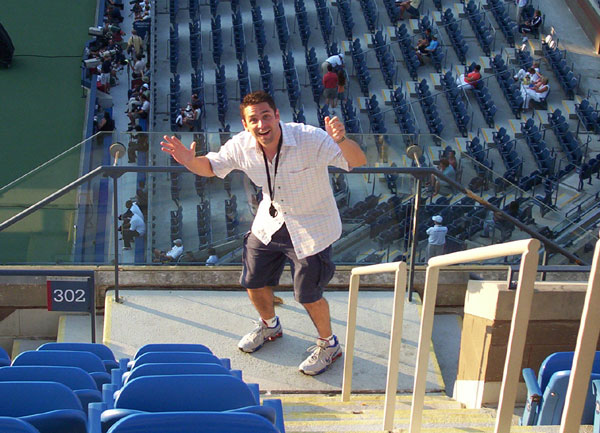 I know I made a post earlier last week about the first day the Open but now that I’m back at home, I thought I would make a more detailed post.

The ticket package I bought for Joel and myself gave us reserved seats in the Arthur Ashe Stadium. Those tickets also got us access to first-come, first-serve seating on all the other courts. We essentially could see any match we wanted for the first two and a half days of the tournament.

On day one, world number ones Justine Henin and Roger Federer were scheduled to play in Arthur Ashe in the second and third matches of the day session. Since we didn’t need to get there right at 11am, Joel and I took our time getting some breakfast.

After a quick subway ride to Grand Central, we hopped onto the 7 train out to Queens. This particular subway line was made famous by former major league pitcher John Rocker. Anyways, this is the same train you take out to Shea Stadium which is right next to the USTA National Tennis Centre.

Once we arrived at our stop, it took us less than five minutes to get inside the grounds. We immediately headed to Arthur Ashe. Since I bought the tickets relatively late in July, our seats were in the nosebleeds, nearly at the top row of the stadium. It would turn out that we would never even sit in those seats. In the upper bowl of the stadium, there are no ushers to check your tickets as there are in the lower bowl. This means that if you can find an empty seat and no one comes along to claim that seat, you can sit there all you want.

We initially at least stayed in our assigned section but the sun was just beating down on us. The forecast said it wouldn’t be hotter than 83 F that day but with the humidity, it seemed much warmer than that. We were in the sun for perhaps ten minutes before we decided to move to a section which was in the shade. We luckily found two seats which would become ours for the rest of the day.

Once we were cooler, it became easier to focus on the tennis. When Justine Henin came onto the court for her match, I realized I was looking at the best women’s tennis player in the world. I was really at the Open! Henin then promptly destroyed her opponent and it took maybe a shade over an hour. It was lightning quick. When people say these are world-class players, it’s true. Henin hit the ball harder and with more accuracy than I’ll ever hope to.

Then it was Roger Federer’s turn to play his first round match. When Federer came out onto the court, you could tell he was the best dude on the planet at tennis. He was wearing this bright, electric blue shirt and the whitest socks you’d ever seen. Even from a million rows up, you could tell he was good at what he did and he had lots of money.

Federer was playing an American from Atlanta, Scoville Jenkins, an awesome name if I ever heard one. As I was impressed by Henin’s skill, I was equally impressed by Federer’s mastery of the court as well. The men hit the ball with so much pace, I’d like to see what that would look like right on the court.

Anyways, Federer took the match in three straight sets and at no time did he seem like he was in trouble. Near the end of the match, I noticed something interesting. Between points, kids would be racing down to the courtside wall, near where the players would walk past at the end of the match. Each kid, invariably, had with them a giant tennis ball.

When the match ended, the kids would hold out their giant ball for the players to sign. I took a mental note of this giant, over-sized tennis ball. I would have to look into this.

With the Federer match over, Joel and I had a few hours to kill before the night session started at 7pm. Rather than take in some other matches on the other courts, we decided to have an early dinner at this Cuban restaurant right on the grounds. It was there that I had a $12 US mojito, eclipsing my previous record of a $9 US mojito in New Orleans in 2003.

The night session is worthy of a separate post so I’ll get to that later. I’ve posted a small gallery of pics from the first day.