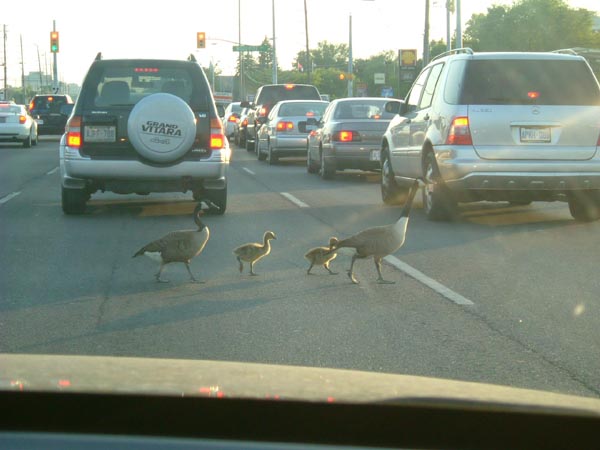 I saw something like this (image courtesy of citynoise.org)

On Friday morning I was on a bus on my way to work. The bus was on a busy four-lane road in Port Moody. Vehicle speeds on this road are usually between 60 and 80 kph, that’s about -23 and 434 in mph. I was sitting in the centre of the bus, right at the back, affording me a view of the entire road.

From about half a block away, I saw a curious sight. Two geese were on the sidewalk, near the curb, on the right hand side of the road. Before I could process any more this, the two geese hopped off the curb and began waddling onto the road and into traffic. That’s where it got interesting. Right behind the two geese were two baby geese, or goslings (non-Ryan version) if you may.

The entire family of geese were completely oblivious to the danger they were in. They looked neither right nor left and seemed hell bent on crossing this four lane road. I looked forward to the bus driver and luckily he saw the whole spectacle as well. He applied the brakes and the bus stopped about fifteen feet in front of the water fowl. Many people on the bus got up to look out the front. The geese were almost clear of our lane when I looked to my left to see if the other lane had stopped as well.

A Ford Explorer pulled up along side us and came to a stop. Props to the driver for stopping since he couldn’t see anything and he might have just kept on going. Instead, he and the bus driver exchanged glances and a few words of disbelief as the geese cleared the safely second lane.

Now I was getting worried about the traffic coming the other way. There were two other cars coming towards us. The first car was in the fourth lane, while another was in the third but a ways behind the first. The bus driver tried to help by honking his horn repeatedly. It might have helped since the first car came to a stop near the geese and the driver watched them cross the third lane, and then let them waddle across the last lane to safety. By that the time, the last car zoomed passed all the stopped cars. I looked and saw a tiny, middle-aged lady drive by, oblivious as the geese were to what was happening.

Everyone started moving after that. As we pulled past the geese, I could see the entire family making their way along the sidewalk. I have no idea where they were going. They were headed away from water and from anything that resembled a goose habitat.

I want to think they’re ok now but the cynical part of me thinks they tried to cross back later on and were all hit by traffic.

One thought on “ANIMAL CROSSING”