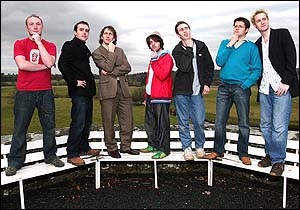 Starting on Tuesday night, channel E4 will bring to the airwaves the English take on the “social experiment”. For better or worse, they’ve tinkered with the concept slightly. Instead of a mansion, there’s a Scottish castle. At least one of the beauties has a university degree, unlike any of the previous beauties in the American version.

The Sun, London’s finest daily publication, has an exclusive first look at the contestants on the show. Click here for more pictures and an article on the new show. If you ask me, and most people do, I don’t think the geeks look geeky enough.

If this winds up on the torrents, I might give the first show a look. I just hope they provide subtitles.