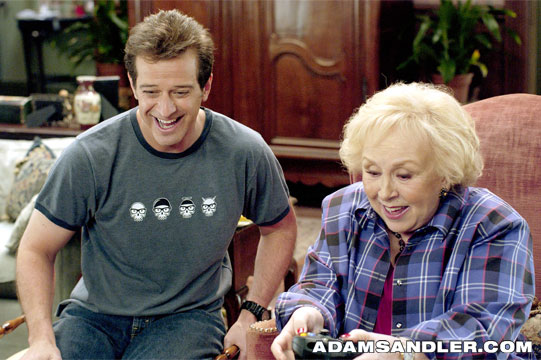 Well, they’ve finally done it. Adam Sandler and his production company have made a movie about the life of a video game tester. Yes, the glamourous life I lived for about two years will at long last be immortalized in movie form.

Here’s the plot summary from what I’ve gathered on the Internet. The main character Alex is a video game tester in his mid-30s with no girlfriend. He’s been evicted from his apartment after his roommate spent the rent money on hookers. Forced to couch surf for a while, he winds up staying at his grandma’s house with two of her friends. Hilarity reigns throughout the movie.

You can find out info about the movie in several places. There are two trailers here. One is for those under 18 and the other for those over 18. Both trailers are actually quite funny. Once you access the adult trailer, you’ll also get access to a delightfully raunchy clip. It’s not exactly high-brow material, but that kinda captures the whole video game testing environment. Pictures and behind the scenes video can be found at Adam Sandler’s web site.

I have no doubt there will be more than a few testers at EA Canada who will be catching this flick on or after January 6. Whether or not this movie will give them more respect remains to be scene. Things like the character who still sleeps in a racing car bed won’t help their image. On the other hand, maybe this movie will help them get laid easier.

Now, if they can only make a movie about video game software engineers… because that movie would be totally different…