Sorry for the lack of posts but the erwintang.com offices were closed for the Thanksgiving long weekend. Speaking of the long weekend, I did nothing of any interest for the three whole days. I didn’t go east of Lougheed Mall in Burnaby, nor did I see any of my friends. It was quite lame actually. I did, however, get some laundry done including the requisite ironing done. With all the overtime I was doing, I was running out of clean clothes. I had to double-shift some of my socks, though thankfully the same did not apply to my underwear. I also re-arranged some of the furniture in my bedroom so that I now finally have an unimpeded path to my closet. I’m now prediciting that at least one-quarter of the clothes that leave my closet will eventually get hung back up.

In other news, my mother returned today from a week long trip to North Africa. She went to a few different countries but the most interesting, at least for me, was Tunisia. Some of you might realize what significance that country has with regard to a series of six films made by independent filmmaker George Lucas. Tunisia doubled as the arid planet of Tatooine, a much referenced place in both the original trilogy and the prequels. My mother not only travelled to Tunisia but visited the actual area where they filmed. Now I know Mom ain’t the biggest Star Wars fan in the galaxy so she probably viewed this hole in the ground as another minor detail in the whole North African tour. This would be in stark contrast to my own reaction to visiting the site which I would hold in reverence. To her credit, she did take some photos of the Owen homestead. The first is her own picture, followed by a screencap from A New Hope, filmed nearly thirty years ago. 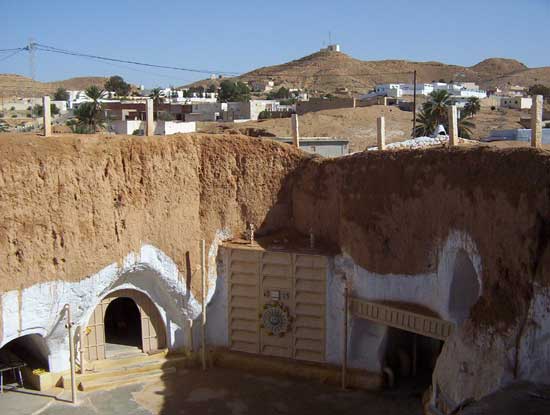