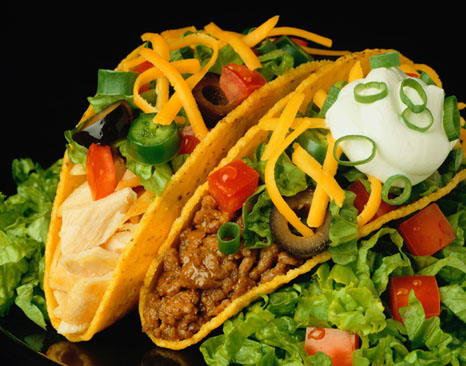 They were serving tacos for dinner at SJC tonight. I’d been looking forward to this meal for several days now. I love tacos. I’ve said it before and I’ll say it again, if there was a Taco Bell on campus, I’d be in big trouble.

Anyways, these things were fantastic tonight. I got three beef tacos with salsa, cheese, and sour cream. I thought last night’s dinner of fish and chips was good, but the tacos were over and above that.

I had an interesting thought this morning. I was wondering if anyone at SJC would eat their tacos with a knife and fork. SJC has residents from all over the world, but I got the feeling that if someone were to eat their tacos with a knife and fork, it wouldn’t be because they didn’t know any better. The most likely reason would be that they were just too prim and proper to eat with their hands. There are a few types like that at the College. They must have had an interesting upbringing.

When dinner started, I was thinking it was quite unlikely that anyone would eat their tacos using a knife and fork. It just seems so impractical, how the hell would you even do it? I can see eating a pizza using a knife and fork, but a taco? As people sat down to have dinner, I noticed everyone was using their hands. Would I finally be surprised by the residents of SJC?

Then the “librarian” sat down with her food. The “librarian” is a resident who is in her early 20s and is by all accounts a very nice person. The interesting thing about her is that she seems very prim and proper. She dresses immaculately at all times. She’s very formal with her clothes and comes to dinner looking very sharp. While others come to dinner in sweats, I doubt she would even entertain that thought.

I noticed that she was consuming her meal with meticulous detail. Using the knife and fork, she broke open the taco shells, carefully loading her fork with all the taco fillings. If it had been socially acceptable, I would have just stared at the whole facinating process. I’m a slow eater, but being the uncouth heathen I am, I completely finished my three tacos in under ten minutes. I wasn’t timing it exactly, but I think at the 20 minute mark, she was still working on her first taco.

Carl was bugging me to explain it to her that it’s ok to sometimes get your hands dirty when you eat. I declined.

I still believe in a “to each their own” type of philosophy, but I saw something today that I’d never seen before. I wonder how she eats chocolate bars?