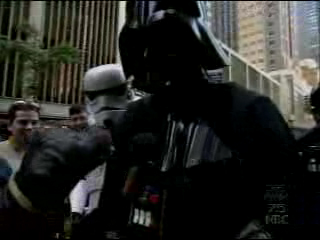 It’s finally here. This week, Revenge of the Sith opens worldwide (except in Japan) in theatres. In honour of the occasion, I’ve decided to pull out a classic comedy clip. For those of you who watch Late Night with Conan O’Brien, you’ll probably be familiar with this selection. Robert Smigel writes and performs the Triumph the Insult Comic Dog skits in which he uses a hand puppet to mock celebrities and regular folks alike.

In May of 2002, Triumph visited the Star Wars fans lined up outside the Ziegfeld Theatre in Manhattan. It was heady times back then as the world waited for The Attack of the Clones to premiere. What followed is widely regarded as one of the funniest mockeries of Star Wars fans, akin to Shatner’s skit for Star Trek followers.

Here are just a few lines from Triumph:

“It’s a big commitment standing in line waiting for the show, how do you explain this to your imaginary girlfriend?”

To a rare girl in the line up:

To a pregnant woman in line after hearing her due date is in six weeks: