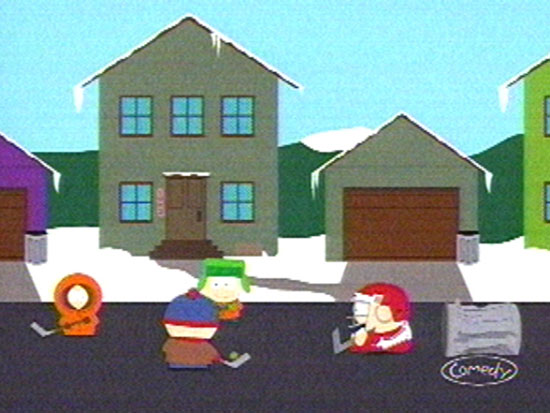 So, I’m thinking the highlight of the night was going to be visiting Dairy Queen with Joel, Kathleen, and Helen, but boy was I wrong.

I get dropped off a few minutes after the 9pm start for hockey. I rush to get changed, grab my gear, and head off to the parkade next to SJC where I expect to play to have already started. There’s already four dudes playing and I make it 3 on 2 for while. Several minutes later Joel joins us to make it an even 3 on 3. There’s myself, Adam, Carl, Tyson, Joel, and T-Bone’s friend, Dustin.

We’re having a good time playing hockey when out of the corner of my eye, I see a yellow-jacketed UBC parking employee. This is never, ever a good sign. The last time I had a run in with these guys we were accused of breaking a parkade entry gate. Back then, it took the guy a minute to figure out that we weren’t doing anything like that. The dude was cool though, so this was what he had to say to us, “Look, by the book, you’re not supposed to play here, ok? And by the book, I have to ask to you leave. But if you leave and come back five minutes later, and I don’t notice, I can’t do anything about that right? I did tell you to leave right? Do you understand?” We most certainly did understand and for years this is the understanding UBC Parking and on-campus residents have had. We give them no grief, use common sense in the parkade, and in return, they look the other way.

So, back to the present. This guy, we are to find out later, is new, fresh of out the academy so to speak. He tells us we’ve had our hour and it’s time to leave. Apparently, he talked to the boys while I was away. He tells us that the parkade is for parking cars and not for playing hockey. He also says there are cars in the parkade. This is true but we try to tell him we’ve been playing here for years and we never play anywhere close to any cars. In fact, there are only two cars on our side of the level and while he’s talking to us, one of the cars gets driven away by its owner. We ask him where we should go to play. He tells us we should go play at our homes, anywhere but in the parkade, he doesn’t care.

It’s clear that this guy isn’t going to be cool with us, so we make the decision to leave. As we move all our gear down the stairs of the parkade, we realize that the street is out of his jurisdiction. We set up our nets in the street next to the entrance to the parkade. We’re now playing in a street with much more traffic than where we were. The lighting is much poorer and we’re harder to see and it’s harder for us to see. We have to stop for several civilian cars and more than a few UBC Plant Ops vans. The funny thing is, the parking dude we were talking to eventually makes his way down to the first level of the parkade to check cars for tickets. He’s checking the cars not 15 feet away from us, clearly we are in his view. What is also clear is the amount of increased traffic we are facing. He doesn’t give a damn about our safety, just that we’re out of the parkade.

We continue playing but before long, another guy stops us to talk to him. He’s got a baseball cap on and looks like your typical UBC tradesperson. He tells us that a few of his guys have been driving by and worried about our safety with all the Plant Ops traffic on the street. Ah, we have a supervisor here. He asks us why the hell we aren’t playing in the parkade. We tell him we were playing there but we got kicked out. He looks surprised at our revelation. We tell him the whole story and he says he’ll try to get something done for us. He gets on his cell phone and starts making some calls. If this wasn’t enough, a campus security patrol car has now made an appearance. The Plant Ops supervisor goes over to the patrol car, talks to the cowboys for a brief moment and sends them on their way, all Obi-Wan style.

He gets off the phone and lays it down for us. We are to get off the street and go back up to the parkade and continue our hockey up there. He says it’s stupid we have to play in the street when there’s a parkade right next to us. He pleads with us to take the stairs on the other side of the parkade so the parking dude won’t notice us. He introduces himself to us as Ted from Plant Ops (name changed to protect the innocent). Ted continues to tell us that we’re always welcome to play in the parking lot in front of the GSB, the General Services Building where Plant Ops is headquartered. As if this isn’t kind enough, Ted tell us if we’re given grief by the parking dude again, we are to phone him at Plant Ops and that he’ll come sort this out. He leaves us with the quote of the evening.

“We’re Plant Ops, we have some common sense when it comes to these things.”

All of us thank Ted and we quietly make our way back to the parkade to play hockey. Though I never had an opinion one way or the other of Plant Ops guys, Ted has done a lot to put them in my good books.

We play for another ten minutes or so, when it all starts to go bad. The parking lot dude returns. He seems annoyed that we have returned. He asks us what the problem is. We tell him we’re just following orders, like we’ve been doing all night. We followed his orders to leave and we followed Ted’s order to head back to the parkade. He tells us he doesn’t care about Plant Ops, he just wants us to leave. Joel gets Ted on his cell phone and tells him the situation. The parking dude is also on his phone. We would later find out that he was talking to the RCMP. A decision is made to play while Ted makes his way over from the GSB. Parking dude haphazardly stands in the way while we continue playing hockey.

Thankfully, Ted makes his way over to us in short time. We stop playing to watch Ted and parking dude interact. Their conversation is extremely short, much shorter than I had expected. Ted comes over to us and talks to our group. He tells us that this guy is new and as such, is sticking to the book a little more than he should. He says the new guy probably doesn’t know where the rules are supposed to bent and how things work in the real world of parking enforcement. Ted suggests we leave it be for tonight and that we should play in the GSB parking lot. He’ll even walk us over to the lot. He’s done so much for us already, we cannot refuse.

On the walk over, Ted tells us that he does a lot of favours for the person in charge of all the parking facilities for the UBC campus. He will send an e-mail to that person and ask him to (somewhat) formally allow us to play hockey in the parkade. No promises are made but he’ll try for us.

We get to the GSB parking lot and it’s a much smaller lot than where we are playing. There are also many more vehicles in the lot. Ted points out his own civilian car to us and that we should watch out for it. We’re now playing hockey closer to cars than ever before in the parkade, yet this Ted guy doesn’t care. His own personal car is in our field of play, yet he’s agreed to let us play in this lot. There was absolutely no obligation on his part to let us play here, but he saw we were kicked out onto the street, and he’d rather have us near his car, than playing in traffic. Of all the people I interacted with this night, he was the most decent.

As we start play, we notice this lot is dodgy. It’s slanted, small, and vehicles are right next to us. Tyson nearly hits his leg on a bumper. We decide that we should play one game for Ted, because we owe it to him. Before we can even conclude said game, the RCMP show up. They pull into the lot and one of the officers steps out of the patrol car. He tells us this is private property and that we can’t play here, and we’re all like, “Nuh uh… you are so wrong.” Actually, we said that we given permission by the supervisor on duty for Plant Ops. We give the officer Ted’s phone number and he starts to call on his cell phone. By now some of the guys have had enough and want to go home. I say we shouldn’t leave until the RCMP recognizes we have p
ermission to play in the lot. Sure enough, the RCMP officers sort it all out and drive off. It’s then we pack up our crap and go home.

There’s no doubt we’ll be returning to the parkade this Saturday to play some hockey because the new dude told us he only works on weeknights. In the end, we easily could have been discouraged by bureaucracy, but Ted from Plant Ops restored my faith that common sense still rules in a few situations.